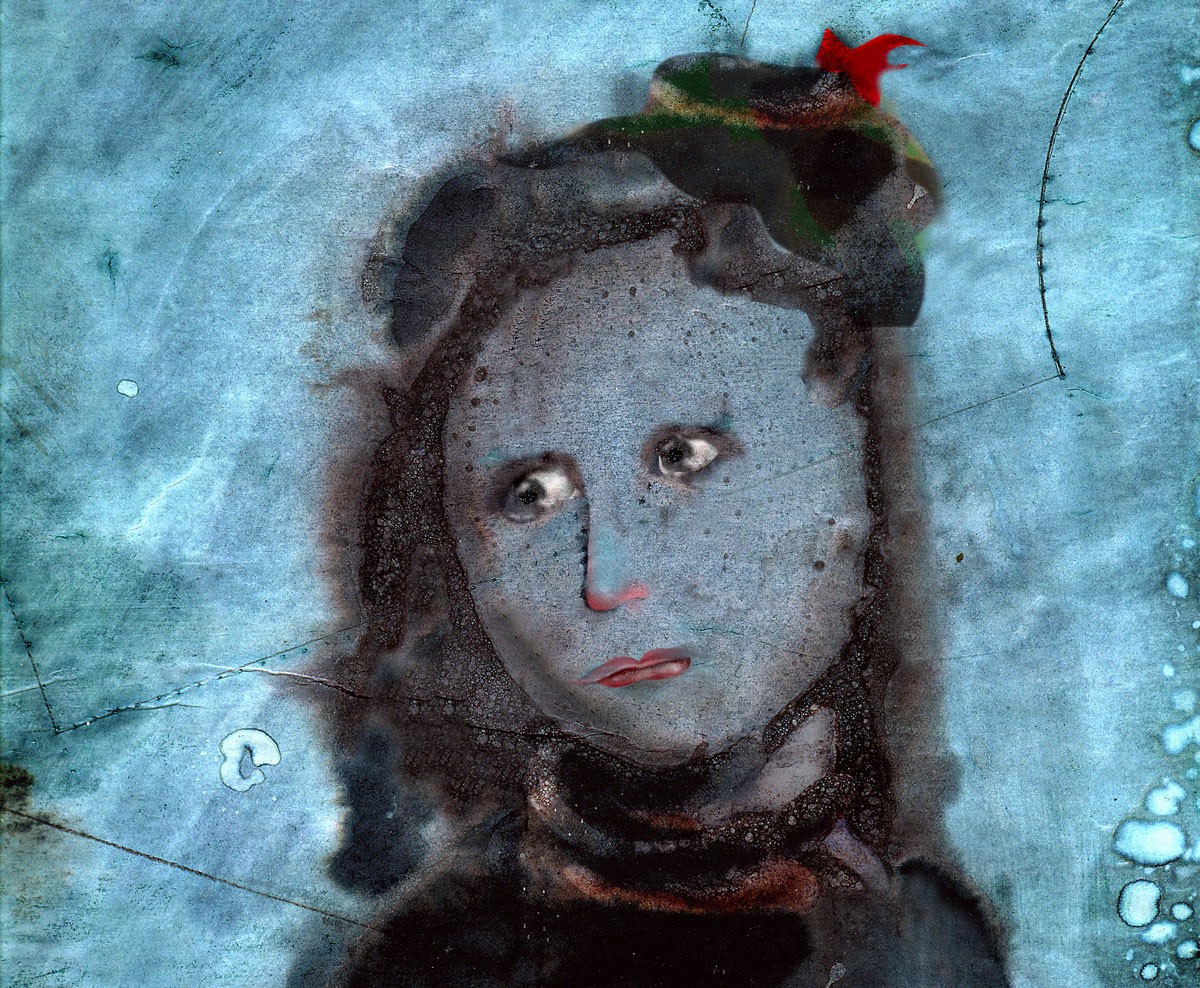 her short story started and ended in the city.a small city, hundreds of thousands of people squeezed into apartments, condos and, here and there, a house with a yard.there was, of course, a part of town with mansions, money as old as injustice itself, but since she never hung out at the mansions (except the one time she went for a business breakfast) that part of town won’t be in this story.especially if we’re being economical with words.so, the short story starts and ends in the city.the smell of bus exhaust and too loud sirens with their too bright lights.

the city was: too few trees, a patchwork of cement, new, white, old, speckled with gravel, grey, dirty, stained with blotches.asphalt married concrete and concrete lay with other man-made material, vinyl siding, cinderblock parking lots, rusty chain link fences and even a rusty horse statue that whimsically sat one of the tiny front yards.what an interesting choice, to use the few square feet of yard to graze a metal horse with its bottle bottom glass eyes watching life unspool with the rise and fall of the sun.

this is all important because she was not of the city.a proud country girl, she still preferred to be barefoot in overalls. like before, she did not have money, so the country now had become a luxury. it was far away. it required a plane ticket, a rental car, gas, meals on the road.the country place she calls home is tiny – no paved streets, no stoplights, one liquor store, one bar, one corner store and the post office / mayor’s house / barber and beauty shop.ni modos, there were ruins of the once-relevant county seat. the large, abandoned grocery store.the brick buildings now vacant but for small creatures and adventurous kids who pried open plywood to sneak in and explore dusty histories. also abandoned was a gas station with an ancient coke machine.a town legend among the Adventurous Kids was that chris once got an old coke out of the machine for a nickel and the coke, though forty or fifty years old, still tasted good.

her town was poor – with some people more poor than others.she thought, as a child, that half the town was rich, like risha bentley, who had pretty clothes and pretty hair and ate a packed lunch everyday with rich people food like fresh kiwi fruit.once, she asked risha if she could taste the kiwi.our little protagonist had never tried one.risha refused to share but described its flavor in alluring detail: “it’s like a banana mixed with a pear mixed with an orange,” she smiled meanly as she licked the green drips sliding down her third grade fingertips.it was fine.when you’re poor you don’t really know any different and while some tastes are more delicious than others, (government block commodity “cheese”- yum! powdered milk in cereal - yuck!)you can’t miss what you don’t know.and, because they lived near fertile farmlands, there were always sweet perfect musky cantaloupe, corn and the hearty yield from the family garden where mom grew potatoes, beans, tomatoes, cucumbers, strawberries, watermelon, squash, chiles and more.the tiny fruit trees around the property grew stubborn small sour plums and apricots, and beautiful perfect cherries which the little girl never got to taste ripe because birds always wake up earlier.there was a tree with silver, furry leaves that produced olives which you couldn’t eat, but which smashed up satisfyingly into a little paste when smashing stuff up was on the agenda.her dad, sick in all ways but physical, had beautiful talents that turned a poor kid’s yard into something preeeeeeettttty darn cool.there were the treehouses, one year she had carpet and electricity in her treehouse.she was inspired by the bachelorette pad feel and used the privacy to make out at a way-too-young age with green eyed amanda.there was “the fort” which looked like a sky blue dog house to the unknowing eye, but which led to an underground play space.five feet deep, the center circle was ringed by a seating area of dirt. “the fort” was great for secret meetings and sat about ten kids plotting or six kids relaxing.it stayed cool and fresh during hot summer days – completely underground and hidden, it smelled, always, of sweet earth and tree roots, which would invade on a regular basis and which would be wrangled into submission by the children who ruled the world from this fort.while ants regularly attended the meetings, no adult or tree would interrupt the important business that took place here.there was the kidney shaped koi pond with an ingenious pump and waterfall that looked as out of place in the plains as a new car. it was beautiful and deep enough for a short kid to play in.since there never were any koi in the pond, perhaps it would be more accurate to say it was really just a kid pond.

so: despite the poverty, despite the poor-enough-for-commodities menu, the lights, electric, water and phone which were never all working at once because something was always shut off due to non-payment, despite the not-so-nutritious-free breakfasts and lunches at school and free vaccinations and other necessities for which you stood in line for a Very Long Time – it could have been a nice life.in many ways, it was.but in many ways, like the secrets behind the heavy, rich doors of mansions, the town and house had ugly, oppressive secrets which broke and rebuilt the people who lived there – emotional frankensteins who would spend life stomping around ugly trying and wondering why they’d never have someone to love.

tumescent bruises blossom black blue purple violet yellow.the blossoms on her face, breasts, arms, legs, everywhere.even her nailbeds are black and blue.what did he do to her that left her nailbeds black and blue?he didn’t always beat her.over the years, she learned there was a pattern, like a moon cycle or some other werewolf vampire monster cycle.the thing is, a year could pass where he was gentle, kind, patient, hardworking.then he’d change.his focus intense on alchemy – how to make gold. or gold panning – how to get gold from the river.or predicting random numbers - how to beat the roulette wheel.his schemes weren’t shallow – he wanted the money to be a provider. so his kids would have food.his mission wasn’t just money for money’s sake.so the first clue would be the focus, then the mean would start and then danger danger.he wasn’t like the regular abusers.it was not a slap first, then flowers. a punch or two then begging forgiveness. nope.as far as the little girl could tell, if her dad decided to hurt her mom, he turned into a demon with a goal of murder. he’d rape her first, then beat her and beat her until all her parts got hurt.he didn’t always almost kill her, but sometimes he did almost kill her and they’d run away – kids, mom, run through town to aunties. run til cops came. run for help.one time mom was wearing only a sheet and she heard her auntie whisper “do you need underwear?” and mom answer “yes.”that time they ran away, her cousin, who always complained when they went on walks, complained that they were running.the girl doesn’t remember many emotions – just feeling very matter of fact: time to run! run, run, run.she felt sad when she heard her mom say “yes” she didn’t understand then what she understands now, but still knew that it was embarrassing to arrive somewhere with no clothes. not even underwear.i mean, everyone has underwear.that specific time, the men in the family went to sit the night with her dad. to make sure he did not come after her mom some more. to keep him inside until the demons left him.who knows what happened between that time and the next. i don’t remember. but what i do remember is that there was a next time. and a next and a next.

she liked to do things that scared her, like go out in the ocean just past where her feet could feel the sea bottom.facing out into the sea, bobbing or paddling in the waves, she could trick herself into imagining she was floating, alone in the sea, one tiny shrimp, a tiny fish, a rubbery leaf of seaweed. a little, tiny, insignificant nothing.rather than feeling bereft at being small, she felt comforted.she felta part of everything.a molecule, a piece of dust. if she was so small, her problems were even smaller. it was one of the reasons she loved to lay on her back and stare up at the sky and see stars behind stars behind stars. to remember that she was stardust. or, to climb mountains with her strong, thick legs. to summit a fourteener and look down – only mountaintops as far as the eye could see. she was tiny. itsy bitsy nothing tiny, dust tiny, molecule tiny, insignificant. it made for a zen feeling - a deep, deep breath.

it’s technically easy to write sad, scary emotional prose. to detail the pains and hurts. it is more difficult to make the mundane interesting. to slowly unwrap a day or hour or squirrel in words that paint life the right colors.

writing was, in the teen years, salvation.all the ick and pain and ouch on a page and not in her.when her baby was born and the most beautiful angel was in her arms, the poems poured out soft and full and warm. nuzzling infant, glowing mother. beauty.now, writing was scary. memories stored in a box in a fridge behind a locked door remain cold, frozen, far from every day. opening all the safeties and examining the memories, holding them to the light could open the proverbial pandora’s box. the other memories could come out unwelcome, warmed like gremlins climbing, wreaking havoc. the careful frozen control, the concrete barriers between past and now were so carefully constructed. it was almost dangerous to write.

her short story started and ended in a city. the pages of a turquoise paper book, the words unscrolled in round cursive, teal ink bundled into sentences neat, clunky, poetic, boring.it was her story, and it was true. and the soft blue pen and the pretty letters made it just a little softer. and the city faded away because it was night and she was ensconced in her home. on a plush carpet in a safe place. her and her story, stretched out, blue.