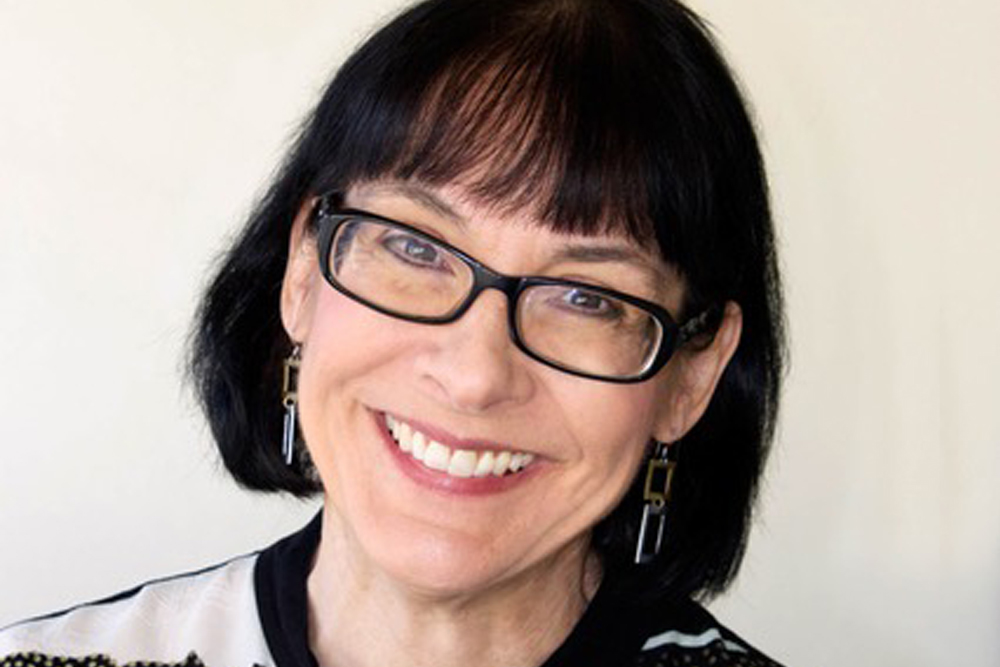 Drawing on grief and politics to shed light on universal truths

Solo Mom Vicki Kirschenbaum—who performs under her maiden name of Vicki Juditz—is an actress, comedian, writer, and spoken-word artist. “I take experiences from my life and craft them into monologues that hopefully shed light on universal truths.” As stated by the Los Angeles Times, “Vicki Juditz is a born storyteller. What sets her writing, and her performance, apart is her sense of humor and eye for the incongruous and ridiculous.”

Born and raised in rural Harrisburg, Pennsylvania, Juditz attended Bucknell University, “ . . . where I was miserable for four years but did a lot of theater.” She left for summer stock the day she graduated and moved to New York City that fall. “I adored NYC and made a great living acting in commercials, then followed my boyfriend to LA and later married him.”

Juditz has appeared in countless TV commercials and sitcoms. She’s performed her original stories at festivals and theaters across the country, including the National Storytelling Festival, where she will again be performing October 6–8. Her stories have aired on The Moth Radio Hour, and KCRW’s UnFictional. Her one-woman show, Teshuvah/Return: Stories of Personal Transformation, was nominated for an LA Weekly Award and an Ovation Award.

Currently, she devotes any free moment to political activism.

Q: Tell me a little about your daughter.

A: My daughter, Molly, is a freshman at the Clive Davis Institute of Recorded Music at NYU Tisch. She’s a singer-songwriter who plays keyboards and bass. The curriculum includes classes about production and music business. She’s also an avid member of the film fraternity DKA, which creates short films. She adores living in New York, as I did.

Q: How did you become a single mom?

A: On October 26, 2012, when my daughter was 14, my husband ended his life. For some months before, he’d suffered from severe depression.

Q: How were you able to cope with your grief while managing your daughter’s?

A: In the beginning, my life was in a state of emergency. I felt I needed to be on duty 24-7. My daughter fought anxiety, panic, and sometimes overwhelming sadness. Gradually she was able to go back to school and get back some sense of normal life. Thankfully, she had a therapist who was a great help. The theater kids and coach at school were incredibly supportive and empathetic, and she had a wonderful music coach who was a mentor and friend. She poured her feelings into original songs . . . the beginning of her passion for creating her own music.

In addition to caring for my daughter, I had urgent, complicated financial challenges. I can’t thank my husband’s sister enough for helping me with these matters. I don’t know how I would have managed on my own.

Like many people who have lost a loved one to suicide, I felt an incredible amount of guilt, certain my missteps as a caregiver contributed to my husband’s death. Every Tuesday I went to “SOS,” Survivors of Suicide, at Glendale Adventist Medical Center. At these “drop-in” group sessions, I didn’t need to explain the guilt. Everyone understood. We could laugh together about the insensitive or absurd things well-meaning people said or expected of us. We shared ideas on getting through the holidays, the birthdays, the anniversary of the suicide. We could be honest and not judged.

Once my daughter was back in school full time, I went to Zumba or swing dancing or went on Sierra Club hikes every day. These physical activities demanded that I be present, focus on the steps or the trail, and not dwell on my mistakes or spiral into worries about the future.

Q: Were there unexpected administrative tasks?

A: My mother had died in 2008 (my father, in 1988). I was her only child, so I handled her affairs. I was familiar with wills and lawyers and what had to be done. I had my husband’s body sent east to his family, and they handled the funeral and burial (despite the challenges of Hurricane Sandy!).

We’d planned to attend, but my daughter had a severe panic attack so we didn’t go. A wonderful friend took us in and opened her home. Countless friends dropped by day and night to offer support. Our friends put together a memorial celebration of my husband that December in Los Angeles, where my daughter performed several of her dad’s favorite songs.

Q: What resources did you have?

A: I don’t like asking for help but did rely on parents of my daughter’s friends to pick her up from school or take her when I had to go somewhere. We had life insurance, so thankfully there wasn’t any urgent need to scramble for work. My husband’s sister was an incredible help, despite living across the country with her own family to care for.

A: About a year after my husband died, my daughter started dating her first boyfriend and spent a lot of time at his house. She told me he had a “real family”—two parents, and a sister.

Q: How did you maintain your career while solo parenting?

A: Before my husband’s death, I was writing and performing stories at festivals and local venues, and volunteering with environmental groups. I particularly enjoyed street theater and demonstrations designed to point out the dangers of global warming. After he died, I put this all aside to focus on my daughter and financial matters. About six months later, a wonderful friend created a writing group especially for me, to encourage me to start writing again. A gift. Another friend invited me to perform at an evening event she was producing. Another gift. Once I felt my daughter was doing better, I began to say yes to opportunities to perform or volunteer. Eventually, I began to make time for things I’d wanted to pursue for some years, like performing at The Moth and taking writing classes.

Q: How did you get into storytelling?

A: When I first came to LA, it took some time to get my TV and voiceover work off the ground. I had a lot of spare time and joined a writing group. I wrote stories that the group said were really monologues. Several of us put on an evening of stories at a local theater, and I got a great review in the LA Times. I was hooked.

Another friend introduced me to a storytelling group that led to performing at local venues, then festivals and theaters across the country—even in Hong Kong.

Q: Who are your storytelling idols?

A: What I do is modeled after Spalding Gray’s incredible monologues. I first saw him perform Swimming to Cambodia at the Wooster Group in NYC. I saw all of his shows after that. Like Gray, I shape events from my own life. I’ve written about my journey to Judaism, my daughter’s birth by surrogacy, my struggle to live a “green” life, my mother’s decline and delusions, the impact of my husband’s death.

A: A solo show of stories about protest, resistance, and civil disobedience. This is what I am focusing on now that my daughter is at college. I was arrested for the first time last week (for an act of “sacred resistance” over recent actions by U.S. Immigration and Customs Enforcement)!

Q: As a Solo Mom, of what are you the most proud about yourself?

A: That I can ask for help. It’s not easy for me. Other moms gave me amazing parenting advice. My husband’s sister flew out and helped with financial matters. Friends came to our house for holidays to make them joyful and not sad.

Q: What is your favorite single-parenting cheat?

A: I’d taught my daughter to ride a bike and helped her learn how to swim. I was sure I could teach her to drive. But each outing was worse than the last. I was a nervous wreck. It made us both cry—sometimes before we even got in the car. So I hired Driver’s Ed Direct. It is staffed with cute male instructors who are writers, filmmakers, and musicians doing some moonlighting on the side.