A Review of “Hail and Farewell” by Abby E. Murray 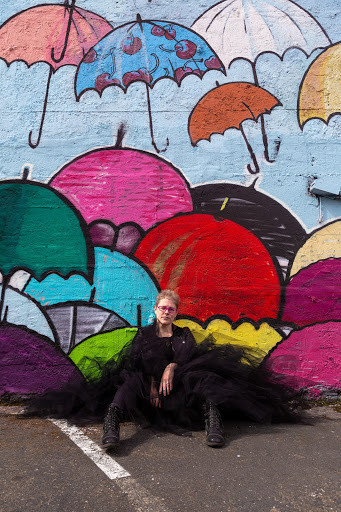 Poems for people trying to stay upright in a tilted world

It makes sense that Abby E. Murray would dedicate her first full-length book of poems, Hail and Farewell (Perugia Press, 2019), to “military spouses who see what happens during and after war, especially those still searching for their way to speak.”

After all, these poems trace the arc of a military spouse, from a newlywed integrating into military life to a parent working solo while her spouse is deployed to a couple trying to find each other after war has changed them to a woman working hard to maintain her individuality within a system that recognizes her only as a spouse.

In “Crossing the Knik,” we meet the newlyweds, “pre-war together, / us before Iraq,” and we get a hint of what it’s like to marry into military life:

your last name stitched in black

my father’s name following me

The poem appears to end on a happy note:

Look at us, you in the driver’s seat

and me beside you, both of us

still lucky and warm and new.

Yet we sense the frailty of the moment, the difficulties—brutality, even—waiting on the road ahead. Murray is a master of this poetic technique: dangling her characters just above the alligator’s teeth, letting the reader fill in the rest.

In poems such as “Ranger School Graduation,” “Tom Calls from Baghdad,” “How to Be Married after Iraq,” and “Army Ball,” Murray shares her unique (and deeply feminist) take on the pressures, ceremonies, and rites of passage in military life.

But it would be a mistake to think this book is only for military spouses.

The themes Murray explores will resonate with anyone brave enough to risk loving in the face of loss, anyone who calls B.S. on oppressive social systems, anyone who has felt like an outsider, anyone who opens her heart equally to both the beauty and the pain in this world.

Through keenly drawn imagery, Murray carries these themes forward, as in “Phantom Limb,” a poem addressed to a deployed spouse, which begins “You say it is amazing what Afghans can build / with so little”:

They take wires away wound around their arms

elbow to shoulder, and the next morning you find a fence

with a swinging gate staked around the patch

of watermelon vines so beautiful it reminds you of home.

The impossibility of protecting what is both precious and under siege, the ingenuity required to create what we need out of what we have—these themes grow alongside the watermelon patch.

In “How to Visit a Grave Properly,” the speaker, preparing to visit her father’s burial site, is seeking a gift to leave behind. She selects:

in its faded pinstripes

even if it won’t be eaten

the way he liked them,

dropped in a cereal bowl.

So described, that onion becomes the missing father, both faded and sweet but not so, as an onion can be.

In “How Can I Tell You This?” death haunts the poem, taking the form of “the bones of birds / I don’t recall falling” and “a mama raccoon / I assume had been dead for days.” But the poem turns its arrow inward here:

beneath a man’s white t-shirt

and I want to tell my daughter

the burning petals aren’t hers or mine,

but how can I?

With this turn, Murray makes us viscerally aware of the ways we’re made vulnerable both because we are and because we love. The poem ends with a plea any parent could make: “help me / warn my daughter that her chest / is full of red flowers I’ve put there / in hopes they never bloom.”

Through artful imagery like that described above, Hail and Farewell disrupts one-dimensional clichés about parenthood, marriage, womanhood, and military life, replacing them with emotionally complex, fully felt realities.

Anyone dancing in that space between life’s “hails” and “farewells” will find herself reflected here.