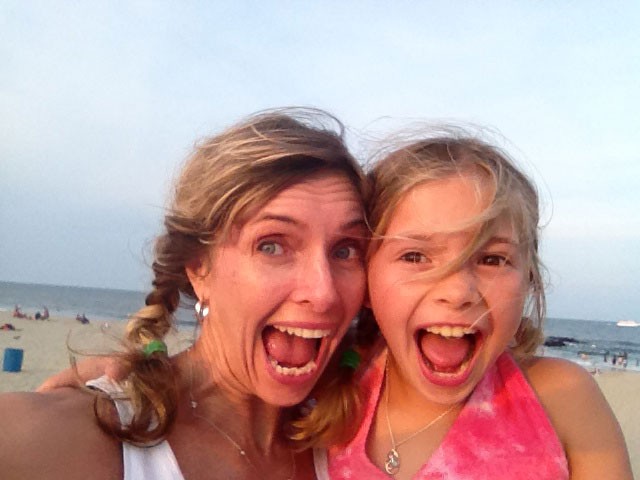 Debra Jo Hughes is an accomplished ballerina and commercial jazz dancer, having performed with regional ballet companies across the country. She’s danced in film, television, and theater, working with top choreographers such as Michael Smuin, Debbie Allen, and Chet Walker. A choreographer herself, she is also a certified personal trainer and yoga instructor, as well the director of the Hudson Valley Academy of Performing Arts and member of the faculty of Steps on Broadway. But her most significant role is proud mama to her 11-year-old daughter, Lola.

Q: I have to ask—does your body hurt?

A: Yes, but only sometimes. I get tendinitis from the repetition of teaching a move, but I take classes for myself just to keep my body going.

Q: How did you get into dancing?

A: I grew up in a small town in California. When I was 14, I found a teacher who had danced with the Joffrey Ballet, and I trained with her. I had to undo everything I’d learned incorrectly in my recital school. I was on the college track for dance but after three years left to join a ballet company—then got injured. As part of my recovery, I started taking jazz classes. I overheard my teacher telling his favorite student she should go to Los Angeles to audition for the Dupree Academy because they have a scholarship program. She didn’t go—but I got a plane ticket and got the scholarship. I worked out of LA for seven years.

Q: Did having a child affect your dance career?

A: I was older when I had Lola and pretty much done as a performer, but I was teaching and couldn’t afford to stop. I taught up to the day I had her and went back one month later. Planned Parenthood kept me going in my dancing years. The only time I had health insurance was the three years I did the Academy Awards; otherwise, it was Planned Parenthood all the way. I got better care [through Planned Parenthood] than I did from regular doctors.

A: I was married from 1993 to 2010, but the marriage didn’t work out. Lola was five when we divorced. The custody battle was a nightmare I never saw coming. The system is broken. With the repeal of the Tender Years Doctrine and the advent of “fathers’ rights” groups, the courts have become increasingly father oriented.

Right now we have shared custody of Lola. I envy women with full custody. I feel like I’m missing a huge section of her childhood. She likes the set schedule, and she can make plans, but I feel bad that she has to live her life split between two homes.

Q: How do you manage solo parenting while working?

A: I am able to revolve my schedule around her. I can do personal training in the mornings and teach in the afternoons and evenings. On the days I have her, I have people teach for me, so I’m there to meet her at the bus and do all the mom things. The other days I teach. I’m lucky because I can take her to work with me. Plus, I have the best neighbors—really supportive.

Q: What’s the most challenging part of balancing work and family?

A: As Lola gets older and has activities, I have to be really organized. Money is also an issue. I’m contemplating going back to school for a second degree in something [so] that [I] can make more money, but I’ll wait until Lola is older. I don’t want to have my nose in the books. I want to play with her while she’s young.

A: Yes. With the ballet school, they really rallied around me. I’m not good about asking for help. But when the studio got flooded, I sent an email around asking for help ripping out the dance floor, and people really came to my aid.

I didn’t have a lot of girlfriends when I was married. It was all about him—which was a mistake—but I’ve made some really close friends since, just from shared experience.

A: One time I was angry with my ex. I was demonstrating something and put my back out; it was a good lesson for me, but I had my daughter that weekend. I was pretty much on the couch, and it was really painful. So I had her bake. I supervised from the couch, but she did it! I gave her responsibility, and she rallied.

A: Learning to be resourceful. I always thought it was the men that do certain things. In our house, I never even put up a picture frame. So doing something like hooking up the VCR to the television, I realized, Wow—these cables are color coded. You figure things out. There’s a moment I call the “shower-curtain moment.” My shower curtain was too low in the bathtub, and I considered all these different ways to deal with it. Then I looked up and realized it was on an extension rod: Oh, I just lift it up. It was an epiphany. I’ve had the best time going to hardware stores and asking questions. I love it when women are handy with power tools.

A: You know how you have to keep your ex’s number in your phone? Every time I’d see his name it would make me angry. Then I realized the only time I call him, it’s about Lola; so instead of his name, I put her name. It completely changed the whole feeling about it—to see her name.