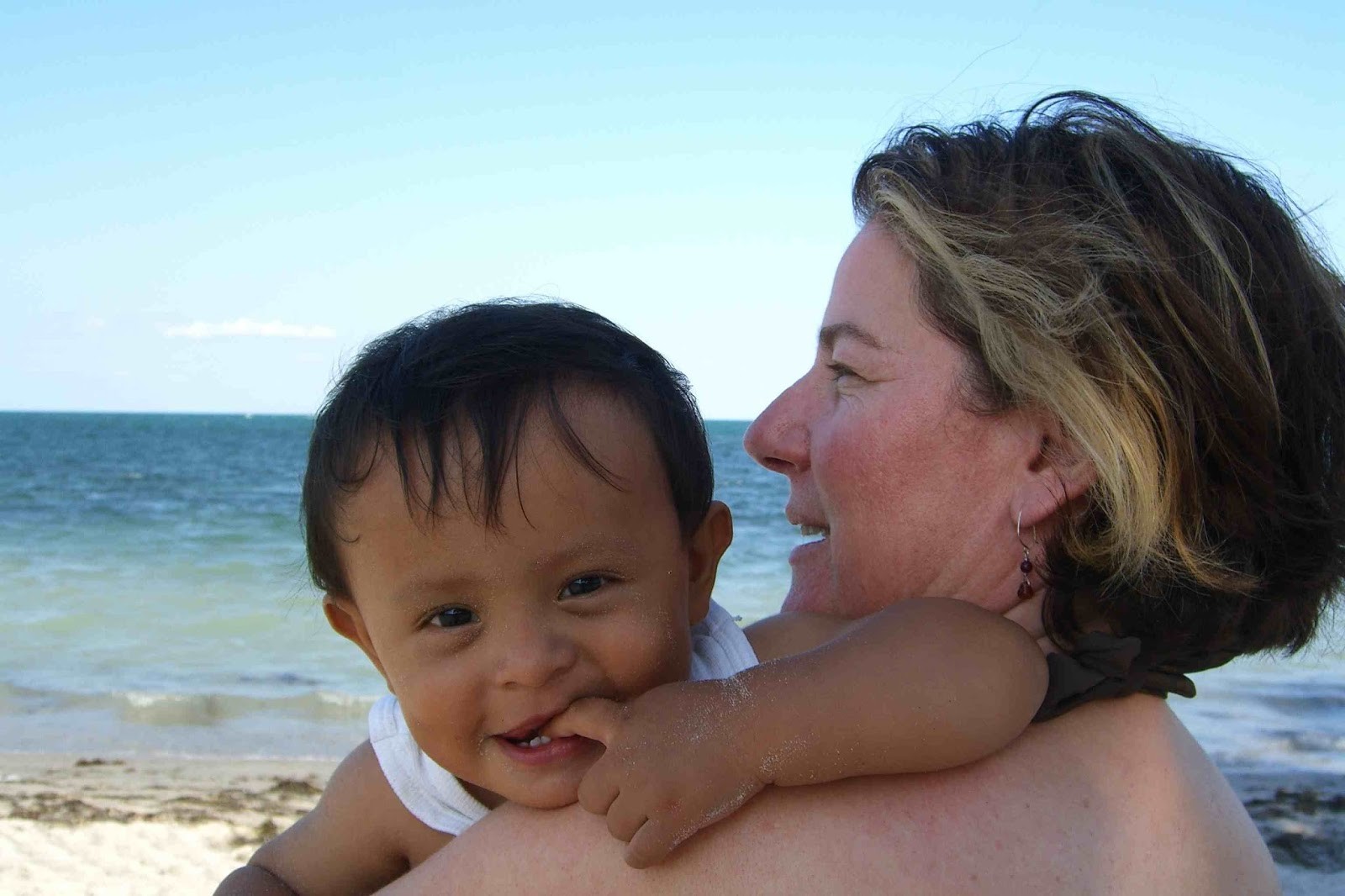 The Women’s Storybook Project of Texas gives moms behind bars the chance to read to their children, and the results are powerful.

Karen Bernstein is an award-winning documentary film and radio producer and editor. She has produced series for PBS, American Masters, HBO, and Etsy, among others. Since 2006, Karen has lived in Austin and Marfa, Texas, and in New York City, where she produces and edits film and radio documentaries. Her current projects include a short documentary about grackle birds in Austin, titled "What Do They Want?"; a webisode series on women at the Hilltop/Mountainview prison units; and, with Galan Inc., a documentary feature, Children of GIANT, which will be broadcast on the Voces series/PBS. Karen is also producing a full-length documentary biographical portrait of the filmmaker Richard Linklater for American Masters. She currently lives in Austin with her partner and eight-year-old son.

Q: How did you get started in documentary filmmaking?

A: At age 53, that question seems archaeological to me, but I remember majoring in theater, then political science, and somehow believing way back when that the two could actually work together toward a meaningful career. I left college and moved to Boston, where I stumbled into a career of community organizing, thinking I would become a political lobbyist for nonprofits dealing with affordable housing. Then I became disillusioned by politics when a couple of bills I was lobbying were purposely killed one midnight in 1985 by the same Senator who sponsored them! From there, I followed my heart and found myself as a 25-year-old intern working at an African American owned and managed production company that had just finished the amazing PBS documentary series Eyes on The Prize. The series proved my gut instinct that history and political science could exist alongside art. I cleaned houses to make money and slowly worked my way up until I moved to New York City in 1990, where I took a research job and explored activism. I cut my teeth with the Women's Action Coalition, which is where I learned to use video cameras. Next, I was hired by a documentary film director who was working on PBS’s American Masters series. I made many films, running their production unit for a good seven years before being swept off my feet—some say “kidnapped”—to Austin, Texas. The things we do for love . . .

Q: Can you tell us more about that move?

A: I knew a great documentary filmmaker who was on a tenure track at the University of Texas, and I fell in love with her. We produced five different films together, including Troop 1500, which aired on PBS’s Independent Lens in 2006. I remember feeling unimpressed by the landscape and feel of Austin; it did not seem "western" enough. A few road trips with Ellen brought us through Marfa, but it was actually Valentine, about 30 miles to the west, that grabbed my fancy. As I tried to get pregnant and hold my relationship together, Matinee Media from New York contacted me: they’d just set up a public radio station in Marfa. The project was ill conceived, at best, but at least Marfa Public Radio managed to get off the ground. Long story short, they paid me to split my time between Austin and Marfa, and though my relationship with Ellen was ending, a whole new purpose was born. The Big Bend area felt like my spiritual home, though my son and I live in Austin now.

Q: Tell us about your journey of becoming a mother.

A: Having that ill-defined but profitable job with Matinee Media allowed me to do two very important things: buy a house in Marfa and build up a financial base to adopt a child. As a single person at age 39, living off the grid in West Texas, I could imagine myself learning to fire a rifle and ride horses on a ranch, but becoming pregnant seemed unlikely. Because I lived within 90 miles of the Mexican border and love that country, adopting a child out of abject poverty there was my first choice, since the domestic (U.S.) adoption choices for single mothers were not great. I'd been a foster mother and could have taken that route again, but without a life partner, and living in far West Texas, the thought of raising a kid with special needs seemed like too much. The adoption process for Mateo took a solid two years and a whole lot of money, but in 2008 I went to pick him up in Guatemala City. I remember sitting in my bed in a hotel there on the night before, feeling the gravity and joy of that moment. I tried in my uber-improvisatory style to stay calm, but I knew that life would be forever different, and so it has been. Mateo was so warmly welcomed by the community in Marfa and is now a strapping and smart boy of eight years who is so brave and kind. Our partnership was born of that difficult trip out of Guatemala City to my mother's house in Miami, which I often compare to holding onto a helicopter blade for dear life during the 1972 fall of Saigon. The entire international adoption legacy in Guatemala was drawing to a close, and we were the last 100 or so families to get visas out of the country.

Q: How has becoming a mother impacted your work as an artist? Your career? Your perception of yourself as artist/mother?

A: When my biological clock went off in my early 30s, and so many friends I'd stayed up all night with seemed to be monogamously settling in to raise babies, I remember worrying about how being a single mother would translate to my workaholic lifestyle. Making documentaries was an 80-hours-a-week job, and there didn’t seem to be much room for an intimate relationship, much less a child. But I had read accounts of famous feminists, like Marie Wilson of the Ms. Foundation, who simply (or not so simply) brought their young children to the job. I embraced the idea that this young toddler could be wrapped in a papoose and carried along as I produced documentaries around the world. He would be an intrepid traveler, even better than me, somehow adding dimension to the delightful narrative of my work life. Yes, I would need babysitters, but for the most part I imagined that everyone would be healthy and happy. Awards, contracts, successful shoots would come and go just as they had before, right? No, is the short answer. At about 24 months of age, my intrepid toddler made it clear that he was losing patience with his mom packing him in a car and traveling day and night, insisting that he be quiet while Mommy worked.

That realization forced me to slow down. To be honest, I am still trying to figure this balance out after seven years! I’m gravitating toward a life that is more stable, with a full- or nearly full-time job, where my art is something I do almost completely on my own. It’s hard, at age 53, to find a full-time job, but I’m gravitating towards aspects of this industry that are more desk-bound, like editing sound or video. Being a field producer is an utterly exhausting proposition, with or without a young child, so I only accept those jobs for very special opportunities. “The Story of Storybook” was one, because I am always interested in the lives of women in prison, particularly since so many of them are or were Solo Moms.

Mateo has taught me how totally involving motherhood can be. Yes, gratifying and rewarding, but even accepting the kudos alone is still being alone. Much of the benefits of having a life partner lie in the ability to share emotional moments, the good and the bad. I'd thought that I could handle the ups and downs as I had every other emotional challenge, but nothing prepares you for the exhaustion of raising a child alone. I think single mothers continually draw from an inner strength that makes being married seem like a cake walk. There is so much to be dealt with each day/night, particularly if there are financial issues, and I have always understood women in prison. It’s easy to make bad decisions if you are a single mother, out of desperate loneliness or poverty. I have turned to bad relationships and made wrong choices in the last seven years, but thankfully none have landed me in prison. This experience is one of many that informs my work as a journalist, a writer, and (of course) a filmmaker. For that, I have Mateo to thank each and every day of my life.

Meghan Gerety is an artist from New York City who currently lives in Marfa, Texas, with her seven-year-old son.