Out in the World Together: Suzzy Roche and Lucy Wainwright Roche 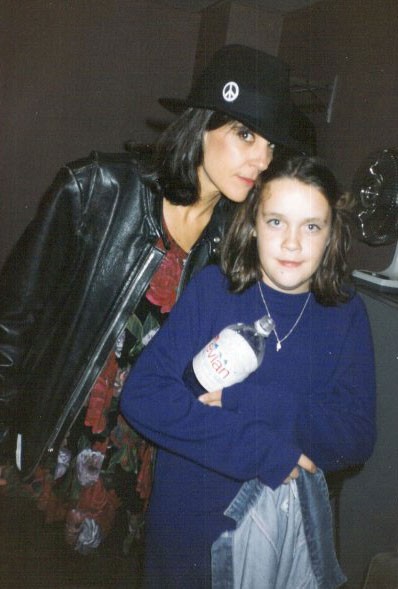 Suzzy Roche may be best known as the youngest founding member of the folk-rock band The Roches, a trio of sisters from New Jersey that toured and produced records from the mid-1970s through the 1990s and beyond. Known for their textured harmonies and comedic lyrics about daily life, The Roches made their name in the bars and venues of New York City and were championed early on by Paul Simon. They recorded many albums and appeared on various television shows. Roche also works as an actress, having appeared in movies such as Crossing Delancey, and continues to compose and perform with the famed theater company The Wooster Group. At the age of 24, she gave birth to her daughter, Lucy Wainwright Roche. The father was her then-boyfriend, folk musician Loudon Wainwright III, who is also the father of singer-songwriters Rufus Wainwright and Martha Wainwright. Loudon moved to London, and Roche stayed in New York City to raise her baby and build her career. Her solo albums include Holy Smokes and Songs from an Unmarried Housewife and Mother, Greenwich Village, USA. She also recorded a collection of musical prayers, Zero Church, with her sister Maggie Roche, which was developed at the Institute on the Arts and Civic Dialogue at Harvard University. In 2013, she released an album with her daughter called Fairytale and Myth, which featured their mother-daughter harmonies along with some singing by Lucy’s father. It won the popular vote for best singer-songwriter album of the year at the Independent Music Awards in 2014. Roche has written a novel, the well-received Wayward Saints (Hyperion, 2012), and authored a children’s book, Want to Be in a Band? (Schwartz & Wade, 2013). She and Lucy produced a companion song for Wayward Saints by the same name, and they donate proceeds from the sale of that song to a homeless shelter in Roche’s neighborhood. Still a resident of Greenwich Village, she continues to compose, write, record, act, and collaborate.

Roche sat down with ESME’s Gina Zucker to discuss motherhood and music.


Q: Were you planning to raise Lucy on your own even before you had her?

A: I didn’t really have a plan when I got pregnant—which isn’t a good thing, by the way—but I knew I did not want to get married; I didn’t want to be in that kind of traditional relationship. I thought, I know I’m going to be taking care of this baby by myself. I’m much better at being a mother than at being a wife, though Lucy’s father is a good friend. He wanted me to come to England with him back then, but I stayed in New York. He would visit, and I was the one who was there for day-to-day life. I was a traveling musician, too, but Lucy came with me.

Q: How did you manage? What was that life like?

A: It was often very stressful financially. I didn’t have a safety net, not that anyone really does, but we didn’t have much. When I’m creating something, I’m totally driven by that, and I don’t feel like I need lots of things. Lucy did not have the sense that we were poor, but we lived in a tiny one-bedroom apartment in Greenwich Village; she had the bedroom, and I was in the living room. Other people we knew were very wealthy—sometimes wealthy people assume that if you’re moving in their circles, you’re wealthy, too. But artists exist in a different economy.

Q: What did you do for emotional support?

A: It became very important to me to make friends with other parents. So I’d take Lucy to the playground a lot and try to talk to people. Some of them looked at me suspiciously. I actually became part of a single-mothers group. Somebody from Lucy’s school called me and asked if I wanted to join, and I surprised myself by joining it.

Q: Why was it surprising?

I had nothing in common with these women, other than the fact that we were single mothers. But that didn’t matter. We laughed together. We hung around for years. We started out meeting in a community center and then eventually met at each other’s homes. We’d have dinner in one room, and the kids would play in another—Lucy was the only girl—and I loved that I could go somewhere and be with adults who were going through the same thing I was and have Lucy there with me.

Q: I’d like to hear your perspective on how motherhood, particularly solo motherhood, influenced or changed your career as a musician and creative person.

A: It drastically changed my life. Nobody else I knew was having a baby. We were hanging out in clubs. That was the end of that for me, and it was a blessing. Lucy gave me focus. I needed to take care of her—and I was so thrilled to have her. I was constantly juggling. I sort of can’t believe what I was able to do—I was like Superwoman! But Lucy was a delightful person. I had an experience when Lucy was very young that was like an awakening for me. I was in Ireland, and I saw a cow being born out in the middle of nowhere. I watched it being born, and then it stood up, and stood right beside its mother. They were alone together in this pasture. It reminded me of Lucy and me. We were very solitary. We were kind of out there in the world, alone together. I always took her with me wherever I went. I never had a babysitter at night or on the road. She was just part of everything I did, and it was natural.

Q: How were you able to work with her around all the time?

A: She had an amazing capacity for entertaining herself. She was very self-motivated and not whiny. If I had to practice my music, she had dolls or toys she was doing something with. We were sharing our days. If we were on the road, we’d do one thing for her during the day, and one thing for me, so we both had something to enjoy.

Q: Did you ever miss not having a partner to share parenthood with?

Sometimes, yes, but the good thing was we didn’t have the tension in our household that people with troubled marriages have. We could do whatever we wanted; there were no rules. I also didn’t do it all alone. We had a village. My mother was very involved; we had two friends who were with us a lot, and Lucy considered herself part of the band.

Q: With your sisters?

A: Yes, when we’d come offstage after a show, she’d say, “You sang the wrong note in such and such a song.” I think she thought of herself as being right there onstage with us. She liked the lifestyle.

Q: And now you and Lucy are making music together.

A: We are traveling around together these days, and it’s very familiar. We travel the same way; we have compatible habits. We started making a record together initially to raise money for Lucy’s solo record. We were working with Rob Morsberger, an incredible musician. He had incurable brain cancer, and our record was one of the last things he did. So we kept going, finished the record, put it out, started doing little shows together, and we are still doing it. We [recently went] to England. We also do our own things. Right at the moment, I’m on my way to Tokyo to do a performance piece with The Wooster Group (a theater company I work with). Lucy and I will continue to work together in the coming year. But it’s a great way to spend time together. And I don’t have to worry about her traveling alone when she’s with me.

Q: What inspires you to create? Have you always been someone who needs to sing or write or perform?

A: Yes, though it’s hard for me to distinguish between the artistic urge and the desperation to make a living. I had to use every inch of my creativity to earn a living. I wasn’t trained to do anything else, and I had a child to support. I’ve been very lucky to have a career that provides income, but I’ve lived in terror my whole life because I have no idea why it’s working or what might come next. I work hard, and sometimes you run dry. Many times I’ve felt hopeless, like I don’t have the power to make anything else. Then all of a sudden I’m being given a little seed of an idea, and I become totally involved in it. It’s like a gift, from whatever is out there, whatever the giver of gifts is.

Q: What would you tell your younger self now? What advice or words of wisdom would you offer?

A: I would encourage the younger me to be nicer to herself, not so self-critical and full of doubt. Trust that even if you have only 15 minutes to practice or to write or to sit alone and think, it’s enough. Those 15 minutes a day accumulate and can wind up turning into a song or a poem or a book. That is a very concrete piece of wisdom I had to learn the hard way! Every little bit counts.

You can listen to their signature harmonies and holiday songs on National Public Radio.