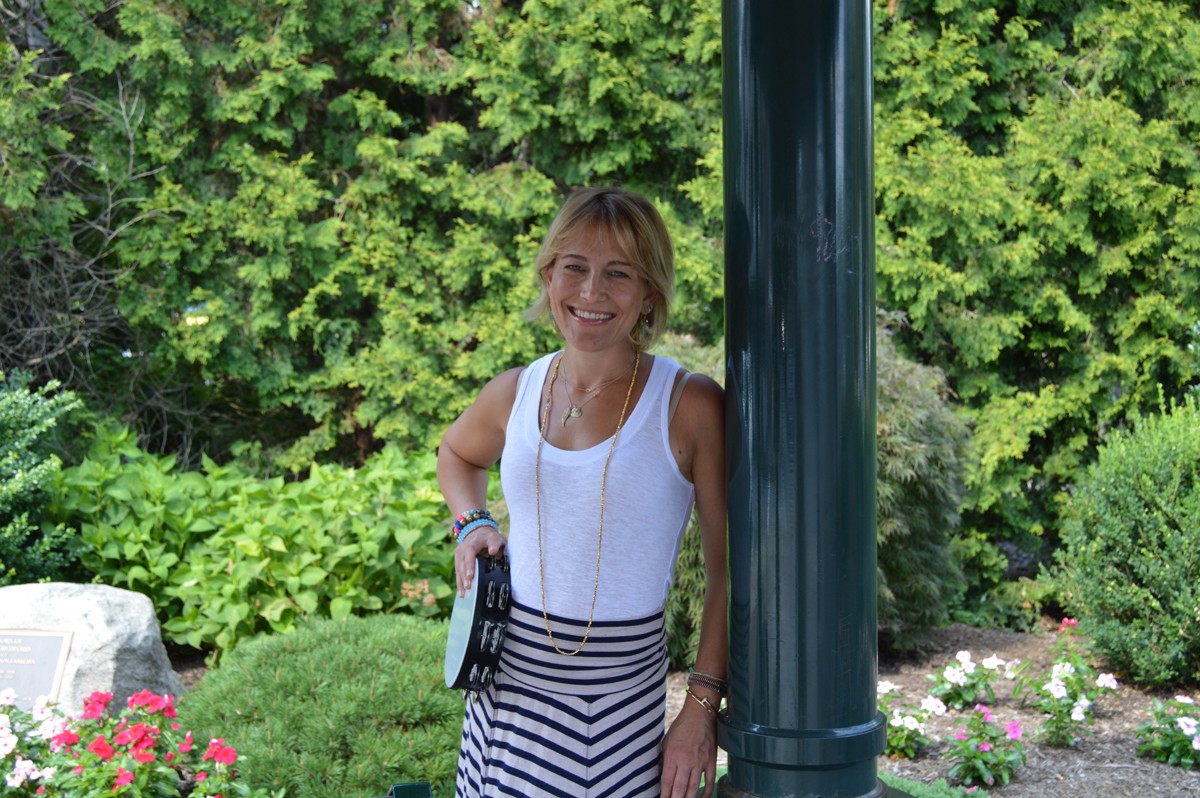 It’s 9:00 on a Friday night, and 41-year-old publicist and Solo Mom Robin Reitzes is standing onstage in skinny jeans, a black tank, and sparkling necklaces from her favorite local jewelry designer. Her short, blonde hair is pulled back into a ponytail, and behind her are the five men who make up her band, Blonde Ambition. She takes a deep breath, smiles, looks out at the crowd, and launches into KT Tunstall’s “Black Horse and the Cherry Tree.” Within seconds, people are on their feet dancing, singing along, and letting loose. For the next three hours, Reitzes keeps them captivated, singing a mix of classics such as Carly Simon’s “You’re So Vain” and current hits like “Forget You” by CeeLo Green.

Reitzes separated from her husband a year and a half ago, and that separation changed her life. She’s become happier, stronger, and healthier since leaving her stressful and emotionally abusive marriage. She’s found solace in her music, which became significantly more important once she was on her own.

“I now sing with more freedom and emotion,” explains Reitzes. “The lyrics really resonate with me now because I understand the pain behind the words. I had so much raw feeling and emotion the first time I stepped onto a stage after my separation, but I channeled it through the lyrics. The words meant more to me than ever. Linda Ronstadt’s ‘When Will I Be Loved?’ was always one of my favorite songs to sing, but now I really connect with it; it resonates with me and my life.”

She now sings to packed houses full of faithful followers. That first concert, just three months after her separation, was the hardest. She was nervous putting herself out there, but after her performance, numerous people told her, “You sound so much better now that you are getting a divorce.” And from there, her fan base grew—middle-aged single men and women are now a core part of the audience, along with what the band calls the “miserably married” group.

Not only did the crowd more than double, but so did the bookings. Her new confidence has resulted in performances once or twice a month and invitations to sing at private parties. Other local bands have also offered her the opportunity to join them as a guest singer at their gigs, something that is new to her.

Reitzes is a singer and publicist, and she’s also a mother to three young boys, aged 12, nine, and five. Her boys are very athletic—all three wrestle, and the older two also play baseball. Her ex is their coach, but Reitzes still attends all of their tournaments and games, cheering from the bleachers and encouraging her boys to always do their best.

Breaking up her family was something she dreaded for years, but after a catastrophic event, she was forced to file for divorce, and she surprised herself. She learned she had an amazing inner strength, she became a more compassionate woman, and she developed self-awareness—learning why she was in an unhealthy relationship and how to avoid that again and become a better communicator.

“I finally feel happy and whole, even though I lost something,” says Reitzes. “It’s strange that losing something makes you feel whole, but it does. I get to be the real me now. I’m a whole person, and before I felt like I was trapped. I was being suffocated, and I was dying in that relationship. I couldn’t really understand it or express myself. I just knew I was unhappy.”

Although she leans on friends and family for support, the music is what saved her. It inspired her. It made her happy and propelled her forward. Music has always been part of her life, but when her marriage dissolved, she made a decision to turn off the TV and surround herself with the men and women whose voices encouraged her. Reitzes’s Pandora stations include music ranging from Stevie Nicks and The Eagles to CeeLo Green and Pitbull. Music is what gets her through those hard moments. And rehearsing or performing with her band after a long, tough day can instantly change her attitude. She describes the feeling as a switch that immediately changes her mood; it’s uplifting.

Leaving her marriage has also helped her search for that elusive balance in life. For Reitzes, balance is always a challenge, and it’s something she struggles with. But now that she’s no longer managing a toxic relationship, she can better focus on the things that are important: her kids, her music, and her health.

“I don’t think I’m ever fully balanced, but I do the best I can,” explains Reitzes. “I fully believe that to be a good, healthy mother and person, it’s important to take care of yourself. I always make time for my music, and I exercise daily because it’s so important to me. Sometimes I do feel selfish, but I know if I don’t do it, I won’t be a happy person; I’ll be cranky, take it out my children, and feel unfulfilled.”

Another key component of her strength has been her ability to open her heart. Although she’s still recovering from her marriage, Reitzes has let love in, and it’s helped restore her faith in the opposite sex. Her boyfriend and children have met only twice. She prefers to keep them separate for now so she can devote her parenting time solely to her children. And she’s still learning what it is like to be supported by a significant other.

“I’m in the healthiest relationship of my life,” says Reitzes. “I can openly communicate with him, and it’s the first time I’ve had my needs met in a relationship. In the past I’ve been very impetuous, so we’re taking it very slow and getting to know each other at a healthy pace.”

“When we separated, my spirit and everything was set free. Now I have hope.”

Grammy Award–winning cellist and founding member of the Eroica Trio