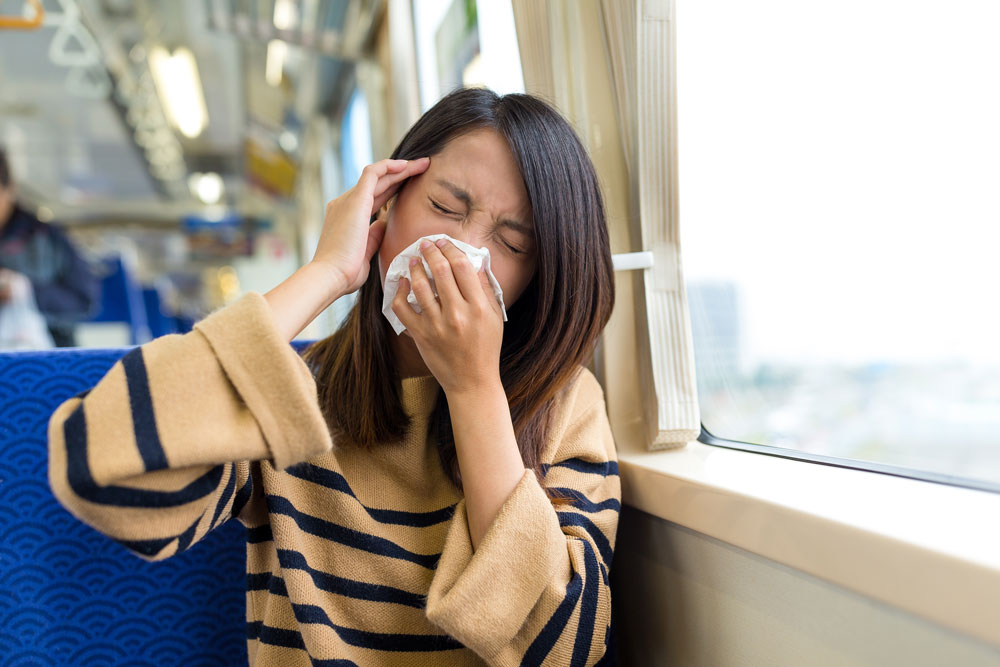 I had never before considered exactly how many steps it takes to get from the yogurt aisle to the frozen-food section.

I got this, I thought to myself as I walked into the grocery store. I didn’t make eye contact with anyone. I just headed straight to the back and began filling my cart with my son’s favorite Greek yogurt, skim milk for my coffee, and a half-dozen eggs (my fallback for his dinner when I just can’t even . . . ).

By the time I had made my way to the front of the store, where the fruit and aforementioned frozen foods were located, I felt—and most certainly looked—like an extra from The Walking Dead.

I had the flu. As I was dragging myself through the grocery store, I was past the point of being contagious, but I was still dragging nonetheless.

It was not the little “cough-cough-oh-I-feel-just-awful” flu. I got the hacking, phlegmy, feverish, urgent-care-doc-is-looking-concerned flu: influenza A, to be exact, one of the more unpleasant strains of this year’s influenza plague that’s sweeping the country and dominating the nightly news. The doctor told me it could be a full three weeks before I’d start to feel more like myself again.

By some miracle, my four-year-old son has not gotten the flu, though I’m sure as I write this he’s spiking a fever at school simply because I typed those exact words. I’ve been scrubbing my hands, making him get his own dishes and utensils, and shrieking at him every time he comes too close to touching the blanket I’ve been using to swaddle myself.

I’m certainly not alone. This has been a rough flu season, with virulent strains that have been blamed for the deaths of dozens, including a 40-year-old marathoner and mother, and several children. I’ve been particularly worried about this year’s deadly strains because my son and I are asthmatic.

But the flu doesn’t skip over solo mothers any more than it skips over the elderly or the young. As I washed and scrubbed and disinfected and held my breath as I opened the refrigerator door so I didn’t breathe on any food, I wanted more than anything to have someone swoop in and take over.

It doesn’t work that way. There was no swooping. I briefly considered hiring a babysitter but then remembered that would be exposing some poor, innocent soul to the contagious vortex that had become my house. I might as well have a biohazard sign on my front door.

For his part, my son really wanted to help. He offered many times to make me feel better. If he could make me stop being sick, he rationalized, he could make me happy again. My sweet boy. So I did a better job of masking how truly awful I felt in hopes he would think that he was doing a good job in making me feel less sick.

I was feeling a slight glimmer of hope—a dash of pride, really—that I had made it almost all the way through the worst of the contagious period without sharing the flu with my child when I started seeing entitled missives popping up on my Facebook feed, shared by married mothers or childless friends imploring the flu-ridden to stay home and keep their germs to themselves.

With the exception of one of the other mothers on my son’s soccer team, nobody even offered. I don’t blame them, though, as any of those errands would have meant coming in contact with me, my house, or my child, who, even though not sick, was certainly a vessel of germs. And none of those chores was anyone else’s responsibility.

Not wanting to expose anyone else to the flu, I took as many precautions as I could. At the height of the illness—while I was still contagious but needed food for my son and medicine for myself—I got groceries using Walmart’s grocery pickup service. I sat slumped in my car sans bra with unbrushed hair and wearing pajama pants. I had reached peak hot mess. As the friendly employee loaded bags into my trunk, I warned him to go “Clorox” his phone that I had just touched to electronically sign my pickup order. I watched him walk away holding his phone in his hand as he prepared to load up another woman’s car. Oh well, I tried.

When I dropped off my son at school, I wore gloves so that I didn’t touch the door handle with my bare hands. I also refused to take him into his classroom, instead standing in the front foyer while his teacher ushered him into the school, imploring me to get out and go home. When I picked him up, I did the same, waiting in the foyer for someone to go find him and bring him out.

When I had to run to the pet store to pick up dog food, I scrubbed my hands before I left and made a conscious effort not to touch my face or anything else above my neck so that my hands would stay as germ-free as possible.

And when I went to the pharmacy, I used the drive-through, washing my hands thoroughly before I left the house and making a point to hack not into my elbow but to open up my jacket and cough into it.

You can make life easier on yourself in other ways, too. Although I’m always averse to using the TV as a babysitter, desperate times call for desperate measures. There was a lot of Vampirina and Dinotrux on a loop in my house while I lightly dozed on the couch.

I also made my son simple but easy dinners even when I couldn’t put a thing in my mouth: eggs, a frozen waffle and fruit, macaroni and cheese, and homemade quiche I had stored in the freezer.

For Solo Moms who are on the go, it can be hard to slow down and let yourself heal, but that’s exactly what you need to do this flu season.