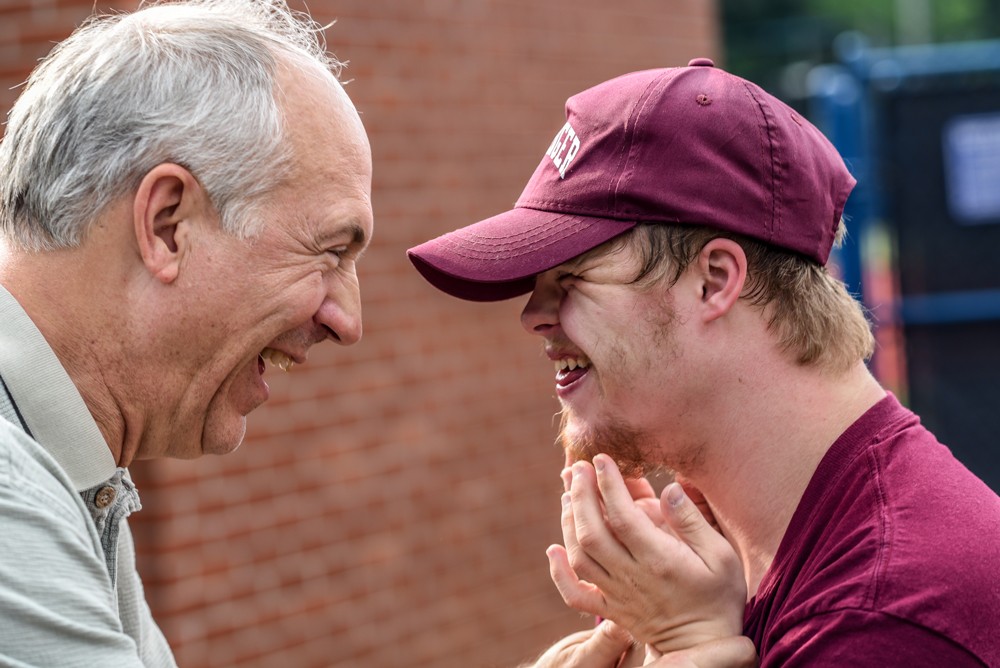 In this article, we’ll look at how three moms are helping their kids with special needs navigate the transition from high school into adulthood.

Lori’s son Aaron has Asperger’s syndrome (a high-functioning form of autism), and though he can do the academic work that college requires, he struggles to get to class on time, have his materials ready, study, and plan assignments. He also struggles with social cues and interpersonal relationships—making friends is difficult for him and so is talking to professors. He moved back home before the first year was finished. Aaron worked for the following year as a bagger at a local grocery store and is hoping to go back to college with some additional supports through his 504 accommodations.

Ginny’s daughter Caitlin told her mom she wanted to work, so her mom got them connected to the local Division of Vocational Rehabilitation (DVR) through the Rehabilitation Services Administration. Caitlin’s dream was to work with animals, so with the help of her job coach, she applied to doggie day-care centers, pet stores, and veterinarian offices. She wanted to consider only those jobs that involved animals. Her weekly meeting with her job coach focused first on creating a résumé, then going to online job sites such as Indeed and Craigslist to look for part-time jobs with animals. Her job coach is ready to help her answer phone calls from employers, set up and attend interviews, and go to work with her to help her learn the job. Caitlin has a moderate intellectual disability.

Diana’s son Spencer went to a state college for a semester but was very unhappy so he returned home. He sat in his room for months before he could muster enough energy to find a job. He worked in a restaurant for a year or so and quit, traveled a bit, and then came back home and sat around for several more months. He got a job with a caterer through a friend, which seems to be working out. He still spends most of his free time alone in his room. Diana is worried that he is not dealing with his depression.

The young people described above have special needs. Though these kids are taking different paths, their disabilities are significant factors in their ability to build an independent life. Their moms are understandably concerned and more than a little anxious about their kids’ futures. Although there are things that parents can do while their kids are in high school (see “Preparing Students with Disabilities for College”), we can’t always prepare our kids or ourselves for adult missteps. Lori, Ginny, and Diana thought their kids were ready, but they were not, at least not yet.

Having followed these young people as they tumbled into adulthood, I want to share some lessons that we can all learn from:

Aaron. Lori and her son Aaron realized that he needed to communicate more effectively with professors, but he wasn’t ready to do that on his own. He became more confident after succeeding at his job at the grocery store. His supervisor at the store told him he did fine with the bagging but that he needed to learn to greet customers and ask if they needed help with their carts, and try to engage more with his coworkers. Aaron has always thought of himself as a quiet person and didn’t realize how difficult social interactions were for him. He was ready to accept more help from his mom and the Disability Services office at his college to get the accommodations he needs. He went back to college (which involved many conversations with the Disability Services office, his professors, and his roommate). Aaron is learning to self-advocate so he doesn’t fall behind and is much happier this year. He learned that it’s OK to make mistakes and to change course. (See “What If My Kid with Special Needs Struggles in College?”)

Caitlin. Caitlin and Ginny were getting frustrated with employers’ lack of interest. Caitlin wasn’t getting any calls for interviews and had too many days with nothing to do. Ginny requested a meeting with a job coach and a DVR counselor to look at other options. They considered several: take classes to learn more skills, find an employer willing to try a paid internship (DVR pays the employee), or do more assessments to determine if Caitlin has the skills and interests to be work-ready. The team decided to reevaluate her skills and conduct interest-inventory assessments in various work environments. Caitlin and her job coach went to a grocery store (they evaluated her bagging, stocking, and cleaning skills); a library (they evaluated her filing, organization, and basic office skills); and a restaurant (they evaluated her dishwashing, hosting, and food-preparation skills). They also visited a doggie day care. Her job coach was surprised when Caitlin exhibited a lot of fear and anxiety when she was around multiple dogs because she isn’t that way around her own dog, a mellow Lab, and Caitlin herself had been so sure she wanted to work with animals. With the new information and assessments, Caitlin applied for jobs in stores and restaurants, and soon she got an offer to work as a server in a senior center. All involved learned that success has many faces.

Spencer. Diana decided to give Spencer more responsibilities at home as well as a long deadline for moving out. She insisted that he meet with her for 15 minutes once a week and review his chores, budget, and activities. Spencer did not come willingly to the first few meetings, but after several uncomfortable conversations, he arrived prepared to show his mom what he’d been doing. He started to engage again, and although Diana isn’t sure there’s a link, she noticed he seemed happier. He also started getting more shifts at work and even went out with friends a few times. He still spent a lot of time on his own, but Diana realized Spencer is a true introvert and needed more time alone than most people. They learned not to give up.

All these examples feature parents who are willing and able to guide their children with special needs into adulthood. With the help of accessible resources and an intimate understanding of their children’s unique needs—and, most important, by supporting and believing in their children—these parents are teaching their children how to lead more independent lives. Makes me proud to be a member of ESME and part of the tribe of fierce mothers.