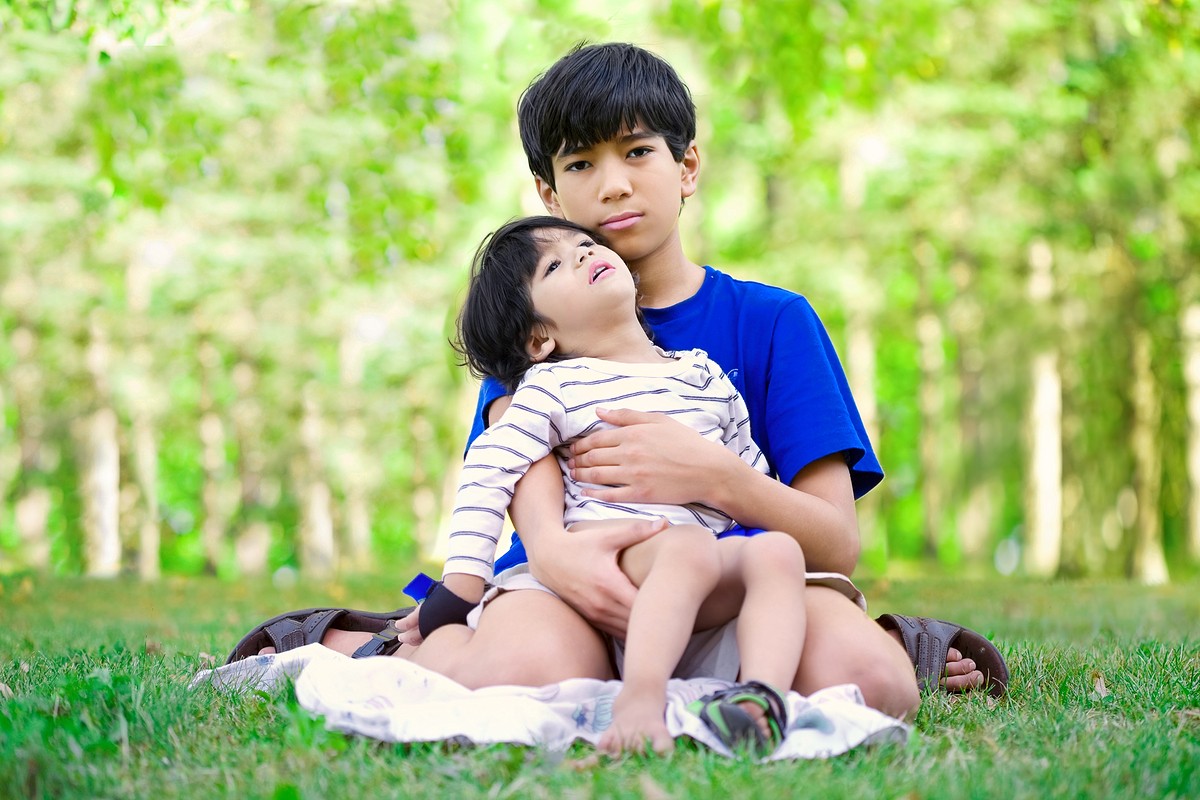 Remind your child that feeling conflicted is normal

Kids who have a sibling with a disability often feel conflicted. They love their brother or sister but may also feel frustrated, embarrassed, and ashamed of him or her. Children’s picture and chapter books offer Solo Moms a safe way in which to help their children understand they are not alone in their feelings.

Reading books with your kids from early on helps to normalize their experience as the sibling of a kid with special needs. Here are books for younger children (aged four to seven) by Woodbine House (a publisher specializing in disability fiction and nonfiction), all of which include a Q&A about the topic, offering Solo Moms straightforward answers to their kids’ questions:

We’ll Paint the Octopus Red (Woodbine House, 1998) by Stephanie Stuve-Bodeen is about a girl who is not thrilled to learn she is going to have a baby brother, but she and her dad come up with things she and her brother can do together. When her brother, Isaac, is born with Down syndrome, she wonders if all the things she wants to do with him are still possible. Her dad tells her that as long as they are patient with Isaac and help him when he needs it, there probably isn’t anything he couldn’t do.

The Best Worst Brother (Woodbine House, 2005), also by Stephanie Stuve-Bodeen (illustrated by Charlotte Fremaux), follows We’ll Paint the Octopus Red and deals with Isaac at age three, and, like most three-year-olds, he has poor manners. Emma is embarrassed by him, and she feels like nothing she does makes him happy. She works through her feelings, at least for the time being.

Evan Early (Woodbine House, 2006) by Rebecca Hogue Wojahn (illustrated by Ned Gannon) is about a girl, Natalie, whose brother, Evan, arrives prematurely and has a long hospital stay. Natalie is worried and angry. No one has time for her because her parents spend every minute with Evan. She is left to struggle with her feelings alone until her mother comes home and they snuggle and talk. When she visits Evan in the hospital the next day, she holds his tiny hand and decides that she can love him.

Playing by the Rules: A Story about Autism (2007) by Dena Fox Luchsinger (illustrated by Julie Olson) is written from the perspective of Jody, sister to Josh, who has autism. The story rolls along with plenty of realistic dialogue, sibling frustration, and confusion from Aunt Tilda who is visiting the family.

Like most siblings, Jody can understand her brother’s actions and behavior even though he is mostly nonverbal. She answers for him when he walks away from Aunt Tilda’s offer to play a new game. She explains that his Picture Exchange Communication System, or PECS, picture cards are a way for him to communicate. She also shares her frustration with Josh’s demanding needs even while she helps him.

My Brother Charlie (Scholastic Press, 2010) by Holly Robinson Peete and Ryan Elizabeth Peete tells the story of Charlie, a boy who has autism. His twin sister shares what it is like to love, worry about, and understand Charlie. “Charlie likes to share how sweet he is and how much he cares about other people,” she writes. This is one of the few books that features African American characters, which offsets the sister’s sometimes patronizing tone when describing Charlie.

For older elementary and middle school kids, these chapter books offer a variety of sibling experiences. Some even have a Solo Mom or dad:

Rules by Cynthia Lord (Scholastic Paperbacks, 2008) is a Newbery Award–winning book that features a brother and sister: 12-year-old Catherine and her younger brother, David. She is tired of David being the center of everything and her needs always coming second or third. Her struggle to be a good sister and get David to follow the rules she is constantly writing down for him is a realistic conflict.

Catherine works through her feelings about David as she makes friends with Jason, a teen who goes to the same occupational therapist as David. Jason uses a wheelchair and a communication device. Her friendship with Jason and a new neighbor, Kristi, helps her work through her feeling of being split down the middle, “Pulled between the regular world of school and friends, and David’s world where none of the same things matter.”

Al Capone Does My Shirts by Gennifer Choldenko (Puffin Books, 2006) offers a glimpse into a unique period of American history during which the employees of Alcatraz prison (in San Francisco Bay) lived with their families on the same island prison as the convicts. It’s a story of a boy, Moose Flanagan, who wanted to please his parents and do the right things.

Moose’s sister, Natalie, presented to the world as younger than him (but is really three years older), has autism, though no one had a name for her “condition” back then. She’s obsessed with her button collection and indexes. She communicates with very few words and has very little social interactions. Since most kids like her are institutionalized and not seen, much less included, no one questions the assumption that she cannot go to public school.

Nat’s autism makes her behavior challenging, and she has fits that leave her exhausted for days. Moose is embarrassed by her at times, as is his mother. He also accepts her as part of his family and truly wants her to be all she can be.

Mockingbird by Kathryn Erskine (Puffin Books, 2011) is a story told from the perspective of the sibling with a disability, 11-year-old Caitlin. She is trying to cope with the loss of her beloved brother, as is her solo dad. Caitlin’s autism is adding to the difficulty of moving on and learning how to be in the world without her brother, who guided her through a world that often felt confusing and out of order.

Her path to closure demonstrates the deep love that can be between siblings and the unique ways that they understood, accepted, and supported each other.

The War That Saved My Life by Kimberly Brubaker Bradley (Puffin Books, 2016) is a story about Ada and her little brother, Jamie, who live with their abusive mother in a tiny, damp, dirty room in London. The conditions and abuse make the beginning of this historical fiction novel (set in pre–World War II in England) difficult to read for young adults.

Ada has a clubfoot and can’t walk, read, or write. She is kept like a prisoner by her mother and told she is feeble and worthless. She runs away to be with Jamie, as he is sent to the countryside to keep him out of London and safe. They end up with a lonely, depressed woman named Susan who doesn’t want them and doesn’t know how to take care of them. Over time, the children and Susan heal, grow, and learn.

Both siblings are traumatized from their lives and struggle in their own ways to adjust to a new, healthy life. Ada has to learn to stop mothering Jamie, a role she knows well, and allow him to grow up, too.

Visit the the Sibling Support Project for more information and support regarding siblings of children with special needs.