Why I Let My Son Wear a Skirt 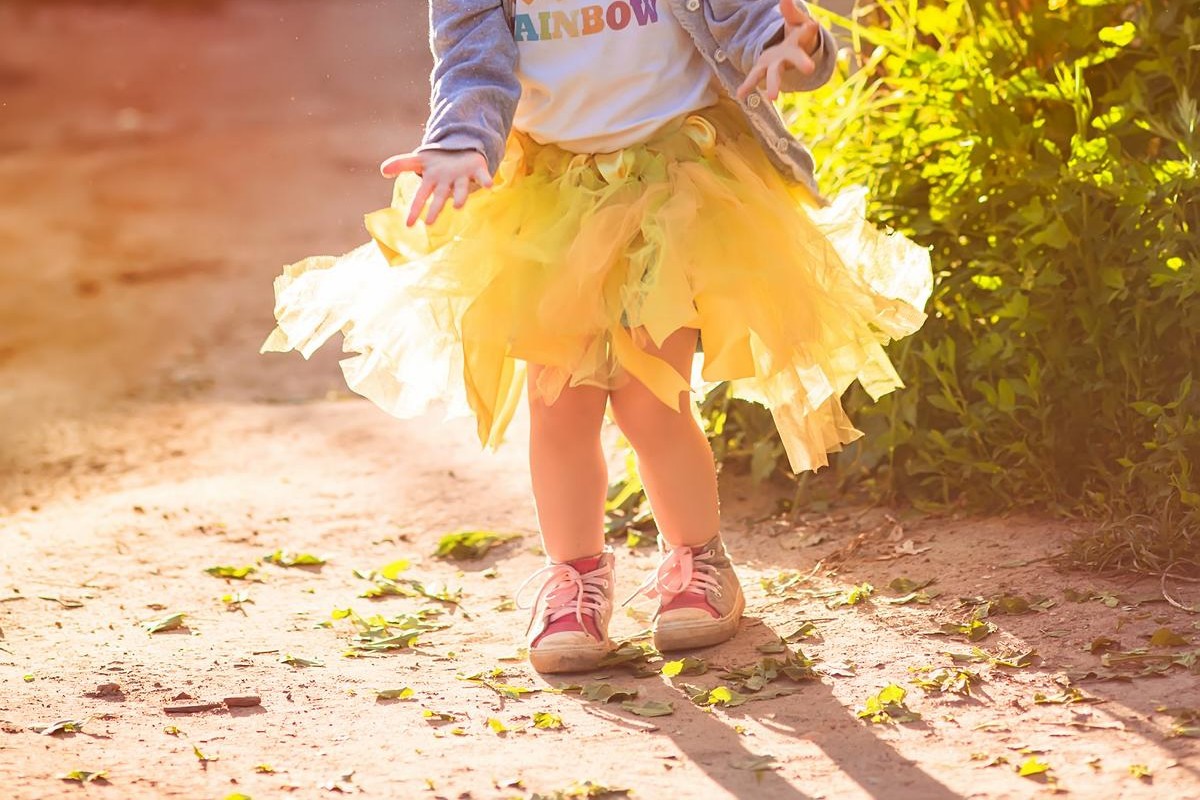 Being comfortable with your child’s identity

Eli’s skirt is made with three sparkling layers of gold-colored tulle. It’s a tutu, really, that I found in the kids’ section at Target. I remember waddling through the well-lit aisles in an exhausted daze, decaf coffee in hand, looking for a birthday gift for my cousin’s daughter. I was very pregnant and enjoying a moment of reprieve from my toddler, who still refused to sleep through the night.

The girls’ clothing section at Target looks like the Candy Land board game—adorable pink peacoats, tiger-striped leggings with little bows at the ankles, and clouds and rainbows screen-printed on tiny T-shirts. I’d be lying if I said I didn’t wander that section on occasion, looking at all the lace, sparkly shoes, and Easter dresses. As the mom of two little boys, I can attest to the fact that the boys’ section is far less interesting. Even though I’m a committed feminist, I appreciate an interesting aesthetic, and I think little boys often get the shorter end of the imaginative stick.

When I saw the skirt glittering on a rack, I remember thinking, this might be my only opportunity to buy one of these. And so I did. I paid $9.99, and I decided to send it to my cousin’s daughter along with some costume jewelry and thrifted dress-up clothes.

But then life happened—the birth of my second child and divorce petition signed, all within three days of each another—and I just never made it to the post office. So the skirt was forgotten, until one day a two-year-old Eli spied the edge of it hanging over the top of his dresser.

“A skirt,” I said, and I took it down for him to see. He immediately asked to put it on, and I helped him slide it over the waistband of his shorts. Somehow, he intuitively knew to spin in circles, knew how to move in order to feel the skirt fluttering out around him.

It’s nearly 18 months later, and the skirt is his favorite piece of clothing—along with his Spider-Man shirt and striped car pajamas. He wears it to birthday parties, to the grocery store, and around the house. He also currently has a fascination with girls. This past October, he pretended to be a little girl from his preschool for two weeks straight. He tells me he wants to wear a dress with “dancing boots” like the little girl he saw on a junior version of The Voice. He instructs me to sit on the couch and watch his performance of “Twinkle, Twinkle, Little Star,” during which he twirls in his gold skirt and hot pink rain boots. Then, of course, he runs into his room and makes crashing noises as he pretends to demolish his monster trucks. Or he puts on his Batman cape and jumps around the room like a superhero.

Children around my son’s age are busy exploring how they fit and feel within their world. Gender identity is a big part of this. For my son, gender is still very fluid, which—I would argue—is a healthy way of moving through the world. Boys love playing house and taking care of dolls until they intuit from their peers or from TV commercials that they shouldn’t. Girls are complimented on their hair instead of their intelligence. I think it’s unfortunate that we, as a society, have drawn lines around colors, toys, and articles of clothing—just as we have drawn lines around occupations and wages, by the way. What a shame to limit our own experiences and those of our children.

A couple of months ago, I received some negative feedback about the skirt from an adult whose opinion I care about. I spent one grueling week questioning my decision to let him wear it and wondering if I was setting the stage for my son to be teased or bullied. Eli had started asking to wear the skirt to school and on visits with his dad, and I worried about being judged.

One night, I stuffed the skirt in a drawer hoping that he might forget about it. But after 48 hours and countless demands for the skirt, I handed it back to him. If I could show you a picture of my son’s face when he was reunited with his long-lost skirt, you would see a child filled with pure relief and happiness. He held the skirt out in front of him and giggled with unabashed delight. He then closed his eyes and pulled the skirt into a long, loving embrace.

I was immediately flooded with the worst “mom guilt” I’ve ever felt. I had to admit to myself that I hid my child’s beloved skirt—even if ever so briefly—because I didn’t want to deal with it. Because I didn’t want sideways looks at the grocery store. Because in a world that prefers that girls wear tutus and boys wear onesies that declare “Macho man” or “Hide your daughters,” my son wanting to wear a skirt was inconvenient. Because even though I am a feminist and an activist, and I fully support and love my transgender friends, when it came down to it, I wasn’t sure how to handle my son wearing a sparkly tutu to preschool.

Though Eli doesn’t know that I intentionally took the skirt away from him, I feel that my action says very clearly, “I’m uncomfortable with who you are.” And I will never do that again to my child. What scares me much more than a sparkly tutu is the idea that I might do something to harm my child’s self-confidence or that I might convey to him that he is not safe or able to be himself with me.

I feel honored to watch my son feel free to be exactly who he is, navigating this space before social pressures ask him to conform. More than anything, I am grateful to my son for being my teacher. And though I don’t anticipate that Eli will want to wear a tutu forever—if he does, I’m OK with that.