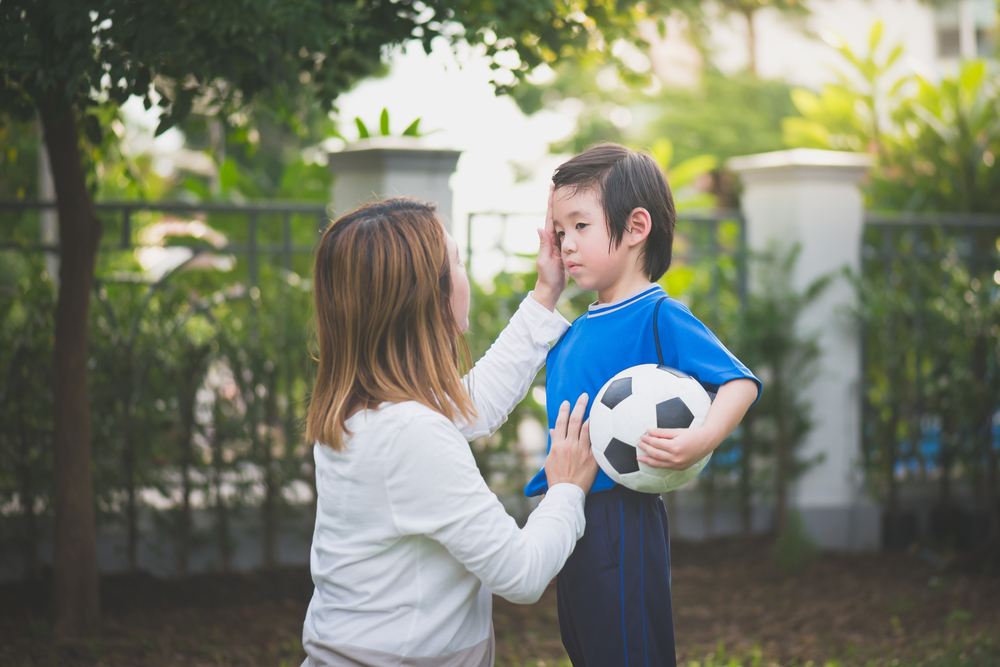 Five lessons from the soccer season

My style of parenting is a twisted mix of “I’ll let him give anything a try if he shows interest” and “Hell, no, you’re not doing that.” It depends on my mood. When my son announced out of the blue at age 7 that he wanted to play soccer, I was convinced it would be a short-lived phase. Boy, was I wrong.

Soccer became his love jones. He developed a knowledge of all the professional players, decided on his favorite international soccer club, and educated me on the sport. Before I knew it, I was all in: custom T-shirts, team mom photographer, shin-guard finder, and glorified cleat cleaner.

First he played recreational soccer; then at age eight, the competitive and time-consuming world of travel soccer found its way to us. It feels like a cult of overly caffeinated parents who eat, sleep, and breathe their children’s escapades on the field. Last soccer season, he joined a new team. Neither the coaches nor the parents were overly welcoming, but I didn’t see that being a major issue as long as my soccer guru was being treated fairly and developing his skills.

Fair, however, is not a word I would use to describe what ensued. Game after game, weekend after weekend, my son’s playing time was minimal. My natural thought process was that he would certainly play more in the next game. I was always wrong. Then I started to feel that the assistant coach was yelling at him a little too loudly at practice. This Solo Soccer Mom was about to become Cuss Like a Sailor Mom. Never underestimate the power of going to your car and having a full-on scream laced with a really inappropriate profanity session. Whenever I use the words dickhead and f**kin’ asshole together in various remixes, magic happens, and I feel instant relief. Inhale love, exhale expletives. Works every time.

Eventually the inevitable happened. My soccer guru was becoming a shell of himself. He didn’t want to go to practice or to the games. “But we don’t quit in this family,” I told him. “Don’t let them break you,” I told him. But he’s 11 and didn’t want to hear my best (not so impromptu) motivational speech.

My boy cub hung in there despite the unprofessional coaches. Some days he would cry, and some days he questioned his skill and ability. But most days he would hold on to the hope that his talent would find its way to the field. Because of his experience, my soccer kid has learned five valuable lessons:

1. People are not always nice, and circumstances are not always fair. He learned this in a very tangible way; the illusion of being treated fairly because you are a kid is over. Favoritism exists, as do biases. It’s not “fair,” but this is just the beginning. More things in life are unfair than fair, and this was his introduction to that reality.

2. Coaches are mere mortals. My kid always looked up to and respected his coaches. His respect was borne from a feeling of youthful innocence. He understands now that coaches can be assholes just like any other human being. In fact, wielding the title of coach may put you at a predisposition for being a jerk. He gets it that his talent is not defined by a coach’s opinion. He has developed the desire to prove his doubting coaches wrong, to show them that they underestimated him. He’s driven to succeed in a way that he didn’t have before.

3. Always finish what you start. He wanted to quit on many occasions, but I would not let him. Now he sees that you cannot give another human being the power to make you quit. He has great satisfaction in completing the journey and seeing the season through.

4. Never let anyone steal your joy. No matter how hard a situation is or how many tears are shed, he understands that no coach, parent, or teammate should be given the power to steal his joy. He has such a deep love for the sport that permeates into the atmosphere. For a brief moment, he was allowing that to be taken and now sees he can’t let that happen.

5. Always show up. The days he did not want to go would be the very days he got to play. Showing up meant that when a teammate was injured or couldn’t make the game, he would get unexpected playing time. All because he showed up despite feeling like giving up.

As a Solo Mom, it’s not uncommon to be fiercely protective regarding even the simplest of life lessons; however, I’ve learned that I cannot protect my son from heartbreak. I’ve discovered that sometimes all you can do is give the tightest of hugs. Heartbreak enters through external forces beyond our control. But as the primary parent, we must be the always-present calming force.

In an interesting turn of events, both of his coaches “resigned,” or—as some would speculate—were not asked back. The new coach for this season is young, passionate about coaching, and seemingly fair. I’m overjoyed because that contagious light is back in my soccer kid’s eyes, and when he steps on the pitch, his swag is back in full effect.

That’s the beauty of youth, to be able to rebound from an experience so quickly. To have the capacity not to linger in the rearview mirror. Thankfully, he has a resilient spirit and is looking toward the upcoming season with enthusiasm and optimism. As always, I’ll be on the sidelines cheering the loudest, but this time it’s for far more than the goals he scores.

What have your children learned from youth sports?

Kai McGee, J.D. is a writer whose work has appeared on Motherwell, Blunt Moms & My Brown Baby, among others. She is also a breast cancer survivor who actively volunteers with The American Cancer Society’s: Reach to Recovery program. In her past life, she was a lawyer/executive. When she’s not writing, she enjoys photography, traveling and lazy mornings in bed watching the food network. She resides in South Florida with her tween son and canon camera. Connect with her on Instagram @onanaturalkai