My Daughter Was Bullied . . . and It Was the Best Thing That Ever Happened to Her! 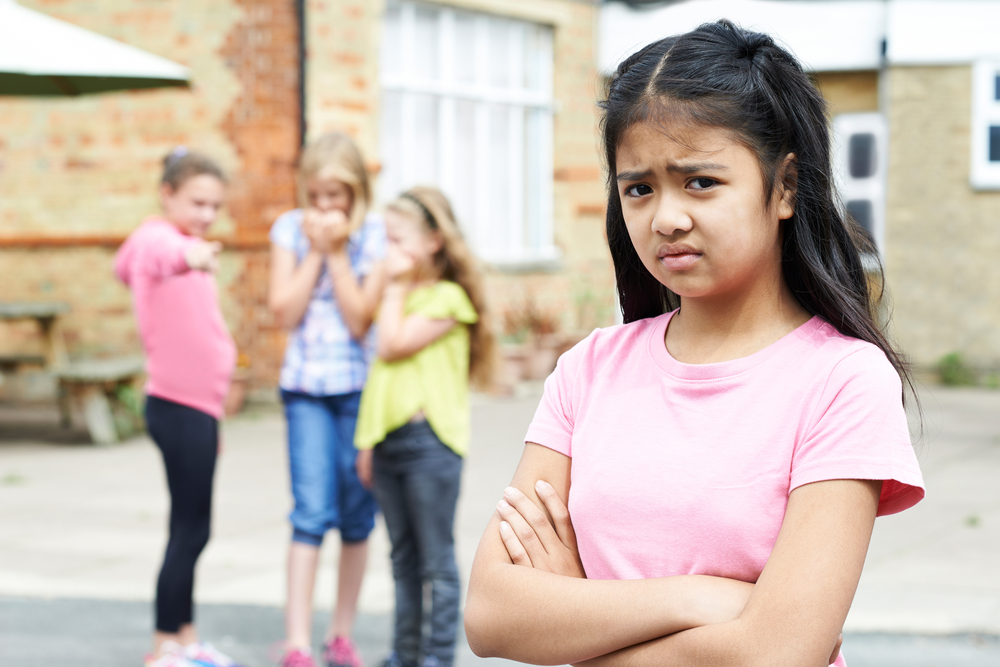 The daughter of a Solo Mom finds her way amidst bullying

Watching your child go through pain is the hardest part of parenting, beating out both projectile vomit and potty-training accidents on suede display sofas at the mall. When your little cherub takes a tumble, you jump into action with Neosporin and a cartoon bandage, but as your child grows, his or her physical pain is replaced with emotional pain that can’t be fixed with anything in your medicine cabinet. If you thought the pain of your divorce was hard on your kid, just wait until you see how deep the pain of bullying can be.

I’ve noticed two kinds of schoolyard bullying. One is when the mean, tough kid picks on someone who’s different than the others. That can include a kid who’s taller or shorter than average; speaks with an accent; has bad acne; or, heck, wears a pant length that’s so very “last year.” The other kind of bullying is when one best friend, or BFF, hoping to “trade up,” rejects another BFF when a shiny, more popular kid comes around. Because bullying happens in every corner of the world and has been around longer than Cher, I figure there has to be some evolutionary purpose for its existence. And although I’m a huge fan of Mother Nature, admiring her artistic work in every landscape and her culinary skills in every fruit salad, I can’t for the life of me figure out why she created bullying . . . and back fat—I don’t get that one, either.

My daughter fell victim to the second type of bullying when she and her bestie started middle school. Over the summer they were thrilled to learn they shared three classes and had lockers on the same floor. They struggled to find a first-day outfit that complemented each other’s without matching too much. But it didn’t take long before their party of two became a threesome when my daughter’s BFF made a new friend. At first my daughter hated this new girl, jealous that she was stealing her friend away. I told her it’s good that her group was getting bigger and to try to accept it, but she’d come home upset, saying the other girls had private jokes, and she was feeling left out. Then she showed me an Instagram post of them posing together at a sleepover, with the caption, “Nothing like friends!” Next, they told my daughter they were meeting at the library steps for lunch; but she couldn’t find them, so she wandered all over campus, unaware they were secretly following her and laughing as she pathetically searched. The last blow was when another student showed my daughter mean tweets about her that these girls were spreading around campus faster than mono. My daughter was inconsolable, swearing she never wants friends again because it hurts too much.

As cruel as this tale is, it’s nothing new. Most kids old enough to grow underarm hair have tales to tell just like it, or are simply waiting their turn for this crap to happen to them to some degree. But here’s the plot twist: bullying isn’t always a bad thing. Well . . . it’s horrible, absolutely horrible, made a million times worse with the invention of the Internet, but my daughter would be the first to tell you that there is an upside. Let me explain.

In elementary school, my kid was shy, a people pleaser and follower, someone who was too weak to stand up for herself. Her sole objective in life was to fit in, be liked, and not make any waves. But after being drop-kicked from her friend group, I noticed an attitude change. She didn’t freak out and refuse to go to school if her hair didn’t fall exactly the right way, and she developed a love of thrift stores and indie music instead of just following the safe teen trends. She had a new strength about her, as if she had played by the rules her whole life and it bit her in the ass anyway, so why not just be herself and not care so much about fitting in (well, as much as a teenager can . . . let’s not expect miracles here).

It didn’t take long before she was invited to sit with a new group of friends who knew about her being bullied. As mean as kids can be, they can be equally as kind, taking the wounded into their fold and nursing them back to health. They added my daughter to their private group chat and included her in their plans, even asking if she’d be Baby Spice in their group Halloween costume, thus cementing their bond. Day after day, my daughter’s confidence grew. Soon she was initiating plans instead of just tagging along, taking these girls to her favorite vintage stores and hosting her own sleepovers. My once painfully shy girl even began raising her hand more in class and spoke up to teachers, once getting applause from the class when she complained a test wasn’t fair, and the teacher agreed and said it wouldn’t count. I watched as my shrinking violet became a strong, bold sunflower, and I couldn’t be more proud.

So here’s the kicker. It’s now several years later, and I overheard my daughter consoling her younger cousin who is going through a similar incident with her school friends. I was floored when my daughter told her that, although being bullied was absolutely the worst thing she had ever gone through, it was also the best. If she hadn’t, she never would have found her real friends whom she totally adores and be the person she is today. And then it hit me . . . the evolutionary reason for bullying! It creates a thicker, protective layer of skin that helps shield the person being bullied from harm. Every time teenagers get rejected or experience pain, their skin becomes increasingly thicker, making it easier to shake off the everyday crap that happens to us all. As they grow, this tougher hide softens the blow when the cute boy who says he’ll call doesn’t, or they don’t get that perfect job they interviewed for, or their coworkers go out to Applebee’s after work and don’t invite them. Just like the changing skin color of a chameleon or a snake’s poisonous venom, bullying is an evolutionary survival tool! Now if only I could figure out the reason for that damn back fat.

Find information about bullying and other school issues in our Education Resource section just for Solo Moms!