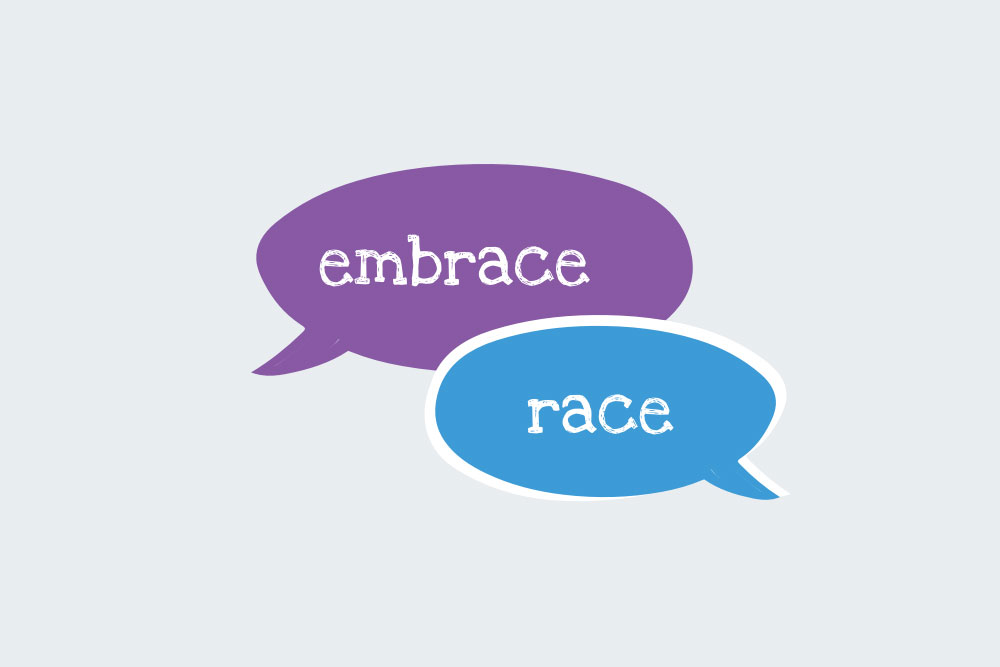 Cofounders of EmbraceRace Andrew Grant-Thomas and Melissa Giraud are passionate about creating conversations and providing tools that help parents navigate raising children in our diverse society. According to the nonprofit’s website, “EmbraceRace is a multiracial community of parents, teachers, experts, and other caring adults who support each other to meet the challenges that race poses to our children, families, and communities. Through EmbraceRace, we will identify, organize—and, as needed, create—the tools, resources, discussion spaces, and networks we need to nurture resilient kids of color and racially literate kids of all stripes, and help caring adults become effective racial justice advocates for all children.”

Together, and as life partners, Grant-Thomas and Giraud bring both their personal and professional experience to inform EmbraceRace, applying their knowledge and convictions about race in America to this passion project. Grant-Thomas has done significant work as a race researcher and racial justice advocate, while Giraud has been heavily involved in K–12 education as a teacher and researcher, and is especially interested in the education of girls and immigrant kids.

Yet, as Grant-Thomas points out, it was parenting their daughters together that drove home the need for an organization that supports parents as they navigate complex racial and cultural realities. “We had lots of convictions and information about the importance of race in U.S. life. However, those convictions didn’t make us as thoughtful as we wanted to be about how to parent our girls. Then we found many other parents and some educators who felt exactly the same way we did and realized that, especially for parents, there wasn’t a ton of help out there online and certainly no organized and inclusive community of folks.”

Parenting their brown-skinned daughters highlighted the need for more dialogue and tools for parents of racially diverse kids. Grant-Thomas explains, “There were specific challenges: the elderly white male instructor in an astronomy class who interacted constantly with an Asian-American boy he called ‘the scientist’ but wouldn’t engage my brown-skinned girl at all. The time my then-seven-year-old burst into tears while wondering whether the wall Trump wanted to build would literally divide our multiracial family in half. The time my other daughter’s best friend, who is white, kept saying my daughter’s hair looked ‘weird.’”

We asked Grant-Thomas, who was raised by a Jamaican Solo Mom, how he experienced race growing up:

When I was in elementary school, I didn’t have a sense that I was inferior to anyone. I didn’t think of it in terms of race, but I remember when I was younger, I was teased for my accent, getting in fights, and I remember standing in front of a mirror and working on getting rid of my accent. I was treated as the “Jamaican kid.” Then, I had a friend that I had that insisted that I wasn’t black, that I was “Jamaican,” so initially I felt like a Jamaican outsider. I was “so polite” and “spoke funny.”

The racial association I had in high school was understanding that people saw me as “exceptional,” and it was then that I understood that that was a racial thing. Yeah, I was a pretty polite kid, more than most, I would imagine. But it was then that I understood implicitly that they wouldn’t be so impressed with my politeness if I weren’t black. I also recall that I wasn’t on anyone’s sexual radar in high school. In hindsight, I was a pretty good-looking kid, but I didn’t register to them. Again this was something implicit in regards to race.

Grant-Thomas and Giraud acknowledge that these and other similar incidents and considerations are the roots of EmbraceRace. Found online and on social-media outlets such as Facebook, EmbraceRace is a home for anyone who wants to share race-related experiences, thoughts, questions, convictions, and concerns— parents and nonparents, adults and kids, Native Americans, Asian Americans, Latinos, Whites, African Americans, multiracial people, Muslims, and others. Race is the starting point, but EmbraceRace is ultimately about supporting one another to help nurture kids who are thoughtful and informed about race and who bring open, inclusive attitudes about others within and across racial lines.

Check out this thoughtful and compassionate organization. Clearly, for Grant-Thomas and Giraud, EmbraceRace is a labor of love born out of necessity. We applaud the work that they do and are especially grateful that in a political moment when hate crimes are on the rise, there is an organization that concerned parents can turn to.

If you think you might want to write for EmbraceRace, first check out the blog to get a feel for it, then drop a line at hugs@embracerace.org and share your idea/interest.