Solo Mom Asibi Gardner and the Challenges of Four Deployments 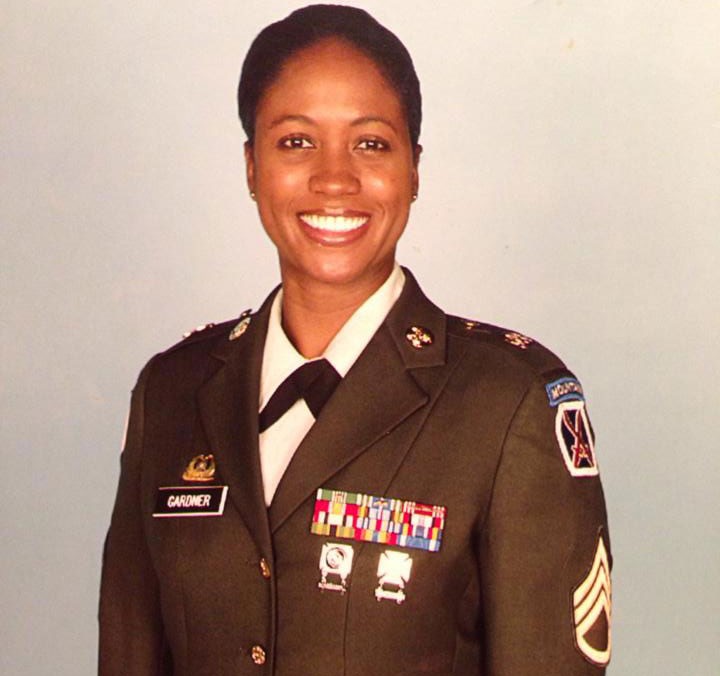 Solo Mom soldier with a baby makes it work

It’s hard to write an objective interview about someone whom I share a history with, especially someone like Asibi Gardner. Think being a Solo Mom is hard? Now imagine solo mothering as a U.S. Army soldier with an infant son and then being called to deployment—four times. She served as a soldier, a completely different life than mine as a spouse.

When I think of Gardner, the first thing that comes to my mind is a beautiful, always-present smile. My husband, whom she served with in Afghanistan, just walked by me as I sit typing and I said to him, “When you think of Asibi, what’s the first thought that comes to mind?” He looked at me and responded, “Who?” Then I remembered that he knows Gardner by her code name, Charlie. When I reminded him, he laughed and said, “Charlie! Always smiling, always positive, approachable, dependable, and my go-to person. She could make anything happen without a complaint and that smile never left her face.” Gardner wasn’t just a soldier in the most-deployed division in the entire army—she was also a full-time Solo Mom. I asked my husband about Asibi’s son and how that factored into the deployment, and he shrugged. He said, “She was a soldier. She made it work.”

When I first met Gardner, she was a single mother of a young son; now, 10 years later, she is married with an adorable toddler daughter added to her family. She is out of the army and planning to go back to school to pursue a degree in social work to help soldiers who suffer from post-traumatic stress disorder. I can think of no one more capable or better suited for that role. Here’s what Gardner has to say about how she made her four deployments work for her and her son. It is my privilege to know such strength and dedication.

Q: What made you choose the army, and which came first—the army or your son?

A: I chose to join the army because being the oldest child of a single parent, I didn’t want to give my mother any additional bills at the time, so I joined to earn money for college. I joined the army in January 1998. I was a soldier a few years before my son, Malachi Brandon Gardner, was born in Watertown, New York, in October 2002.

Q: How many times did you deploy and for how long? How old was your son?

Q: Wow. I can’t imagine what that was like emotionally, let alone logistically. What was your support system like?

A: My support system was amazing for all of my deployments. My mom basically stopped her life and took care of my son, and they’re still really close to this day.

Q: Tell me a little bit about your worst days and your best days as a soldier.

A: I would say that the good days far outweighed the bad days in my army career. I always thought, “Do your best always, and people would notice one day.” So my worst day to me was having a leader who didn’t assist in my aspirations to become an army nurse. I expected leaders to give guidance to help soldiers achieve goals in the army. There were other times that were not so great, like leaving my son for the first time, being engorged with milk, and thinking, “Why am I doing this?” as I flew to Afghanistan.

The best days were when I became a leader and I was able to impact soldiers and help them attain their goals. I also really enjoyed working with the protocol office because I got to see a different side of the army that most didn’t see. I took pride in knowing my job to the best of my ability. I remain friends with some of those people still to this day.

Q: What do you think the long-term effects of your absence, if any, are on your son?

A: Wow, that really brings up a lot of emotions and memories—some good and some bad. I will say that I am not a complainer; but, yes, he wasn’t always close to me, and even to this day I feel deep inside that he thinks I will leave again. That feeling weighs on me. He packed a bag on my last deployment, when he was barely in elementary school, and said he was coming to get me. He struggles in school still to this day because I don’t think he got the foundation he needed in the second-grade class. I think they just let him pass because he was the kid with the deployed parent. I still think back and say I made the right decision to stay and serve my country being a single parent. I just love on him and let him know I will do everything in my power not to leave again.

Q: You are remarkable, Asibi. I hope every mother reads this and hears what you have to say. As a single mother, did you have to deploy? Could you have leveraged that to avoid deployment?

A: Being a single mother doesn’t exempt you from deployments. In my mind, yes, I had to deploy. It was that or get out of the army on the family care plan, and I am not a person that gives up. I made arrangements for my son and spent more money than I probably should have to make sure that he was comfortable and still had things as if I [were] there with him. Avoiding a deployment was not in my genetic makeup. I signed up for the good, the bad, and the ugly of the army.

Q: Again, I am in awe of you and your dedication to make it work. How did you stay connected to Malachi?

A: I didn’t have a lot of contact with him on my second deployment because of logistics, but I did write to him and I colored pictures for my mom to show him. He was a baby. That particular deployment was the hardest one to return from because he didn’t know me when I came home. I punished myself for the decision to leave for a long time. The third deployment I brought a cell phone and called him once a day as long as I had minutes to call.

[During] the fourth and final deployment I woke up early to call him before he went to school every day, which was the least I could do to keep in contact. I also was able to Skype twice, which made me so happy. He was happy, too, and told me he didn’t ever want me to leave again.

Q: Were fellow soldiers supportive of you and your unique challenges as a single parent?

A: Yes; my fellow soldiers were very supportive and even told me I should have fought the decision for me to deploy. I had goals of being in the army for the long haul and didn’t want to ruffle too many feathers.

Q: How did you tell your son that you were going to deploy? I can’t even imagine.

A: When he was old enough, I told him that I had to go overseas to protect him and our way of life so that he wouldn’t have to be afraid to play on the playgrounds. I don’t think he understood, but I kept things real with him and let him know that I was coming back to him and we would have lots of fun when I got back.

Q: What was your motivation and your source of strength? I know that you are a very spiritual person and rely heavily on your faith. Tell me about that.

A: Every time that I deployed, I prayed and asked God to bring me home safely. I joined the choir in Iraq, and I attended a female Bible study to help the time go by and to continue to nurture that faith in God that I knew was there. My grandmother always told me to treat people kindly and believe in God, and I am thankful because God protected me several times. Some of my friends didn’t return, and I will never forget them.

Q: On a different topic, what are your thoughts about female rangers and women serving in combat roles? What if your own daughter wanted to go into combat?

A: Female rangers: I am happy that those women completed the task they set for themselves, and I think it’s great if that’s what they want to do. We as women can accomplish anything, but serving in combat to me is the wrong thing because of the nature-versus-nurture aspect of life. My belief is that gender can be a distraction and can hold back some of the strides that have been put in place in some of the countries the United States has been deployed to. If my daughter wanted to go into combat, I would be against it, but it is her life to lead. I would support her decisions. One thing I do know is she will be able to shoot with the best of them! She already likes guns, and we are going to take her to the shooting range just like my son.

Q: Thank you for such a candid and honest conversation, Asibi. I adore you even more now than before! You are an absolute role model. Two last questions: Would you do it again? Any regrets?

A: Would I do it again . . . That first deployment after I had my son I would have looked in the regulations to see if there was a possibility to not deploy because I was breastfeeding. Other than that, I have no regrets. God makes no mistakes.

Can you relate to Gardner’s story? Connect with other Solo Moms who get it!