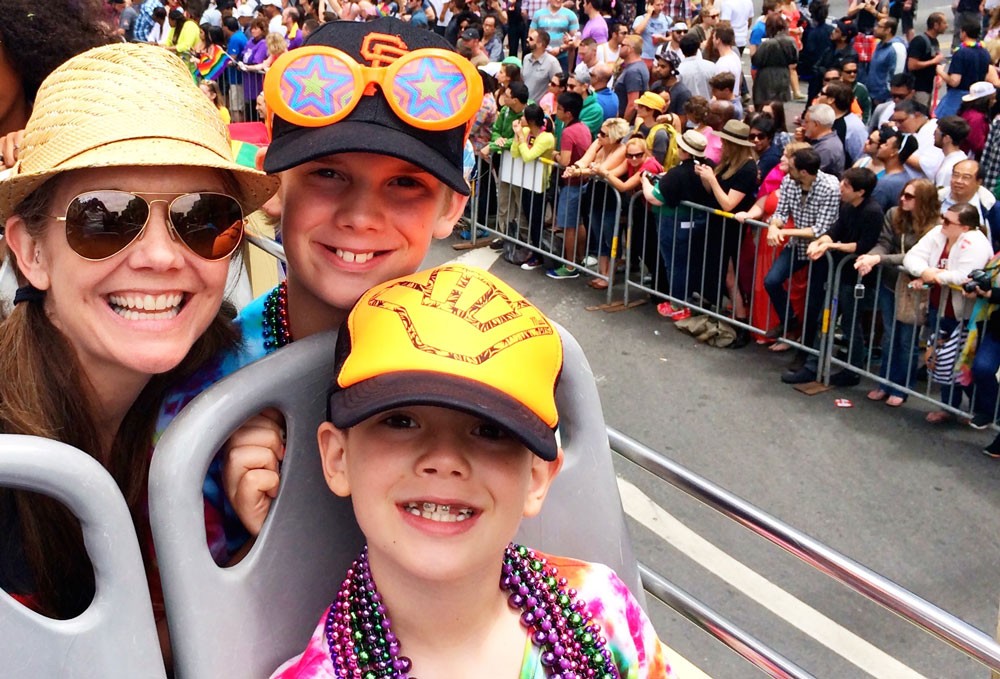 I was sitting on my back porch wrapped in a hoodie to ward off the early morning chill. A freelance writer and solo parent, this summer I’ve been avoiding child-care costs by waking up at 5:45 a.m. and cranking out a few uninterrupted hours’ work before my kids need me.

But on the morning of June 26, I was interrupted. At 7:17 a.m. my phone pinged. I ignored it. Then it pinged again. And again. A rush of anticipation charged through me: SCOTUS.

I grabbed my phone, read the string of messages:

“Marriage Equality for All!”

Sitting on my back porch, phone in hand, tears welling in my eyes, I experienced—physically—the sensation of my body pushing against a brick wall, and finally, brick by brick, feeling the wall crack, crumble, give way.

For ten of the past eleven years, my family stood on the front lines of the marriage equality movement. Starting with my marriage to Tracie—with our firstborn attending in my belly—at San Francisco City Hall, during the Winter of Love 2004; through the ups and downs of California’s Proposition 8 campaign; to the celebration of our legal marriage, with our two children as witnesses, in 2008; to this final SCOTUS decision—we have marched, campaigned, donated, and spoken with media, domestic and international, radio, film, and print.

And now marriage equality is the law of the land.

And Tracie and I are starting divorce proceedings.

The need for legal relationship recognition among same-sex couples first came to national attention during the height of the AIDS crisis in the 1980s to mid-1990s. Lifelong partners not only were losing their beloveds to a terrifying epidemic, they were barred from hospital rooms and treatment decisions by unsympathetic medical staff; they were banned from memorial services by homophobic family members; they were losing their shared homes and belongings because no laws protected their rights to community property, to pensions, to death benefits for grieving spouses.

These end-of-life protections held center stage in the SCOTUS decisions both to dismantle the Defense of Marriage Act in 2013 and to affirm marriage as a civil right this past June. SCOTUS has made it clear that all loving couples deserve access to the dignity and the legal protections of civil marriage, in life and after death.

But standing in the shadows next to happy couples celebrating their love and marriage benefits is something no one wants to talk about: in establishing a legal foundation for marriages that last, the marriage equality movement also has laid a safe, clear, and legal path for those people, like Tracie and me, who have decided to divorce.

As a media point person in the marriage equality movement, in the aftermath of major losses and wins, I got used to answering reporters’ most common question, “How do you feel?”

When Tracie and I first decided to separate a year ago, I felt an acute sense of failure. This is a common stage in the divorce process. The “till death do us part” societal expectation, along with the individual hopes and dreams newlyweds carry into marriage—they can lead people to experience divorce as a deep, personal failure. A few months after Tracie and I separated, that feeling of failure faded to the background, but the SCOTUS announcement brought it back, front and center.

For some gay and lesbian couples, this failure stage is compounded by social circumstances. Whether we have chosen to participate in the LGBT rights movement in a public way or not, everywhere gay and lesbian families go, we become, de facto, representatives of all same-sex parents. At the taqueria, at the beach, at the public library, Tracie, our boys, and I were never just “the Dumesnil-Vickers family,” we were an in-person example of those gay families people were talking about on the news.

I didn’t mind that, really. If the presence of our family at the local park somehow contributed to a larger positive narrative about gay families, so be it. But now that Tracie and I are moving toward divorce, I feel not only as though I have failed to realize my own hopes for my marriage and family, but also that I’ve failed to uphold the “happy, healthy lesbian family” image that has helped open the hearts and minds of the American public to LGBT people.

Of course, I would never consider someone else a failure for choosing divorce; I do that only to myself. This sense of failure is nothing more than an ego-driven form of self-criticism. Intellectually, I understand that. I also understand that the mind’s logic does not heal the heart’s pain. So the best thing I can do right now is to acknowledge my emotional truth: at this moment in time, in the face of arguably the biggest win yet for gay rights, I feel like a failure. And that hurts.

Clearly, I still have some healing to do.

Marriage equality benefits all of us

In the weeks following the SCOTUS decision, I’ve noticed a distinct difference between the political wins of my married past—wins that were simultaneously “for our family” and “for all loving couples”—and this final marriage equality win. According to my pouting, petulant inner child, today’s win is for “loving couples who are still together,” who still have hope for “happily ever after.”

But the SCOTUS ruling is not just for same-sex couples who are still together. The impact of the decision extends far beyond the lives of the couples now queuing up for marriage licenses around the country. The marriage equality movement has created a significant, positive shift in public attitudes toward the LGBT community. The momentum from this win will fuel ongoing fights for federal nondiscrimination legislation, for transgender rights, for safe schools, and ultimately for full, lived equality for all LGBT people, including the divorced and solo parents among us.

As I see it, the power of the win extends even beyond the LGBT community. The success of the marriage equality movement has shown my children’s generation, unequivocally, that hard work, resilience, and an unrelenting belief in fairness really do lead to dramatic and lasting social change. How better to empower young people to continue bending the long arc of history toward justice? How better to empower our children to persist in the face of challenges?

This morning, when the boys woke up, I told them about the SCOTUS decision by handing them my phone, this image emblazoned on the screen: 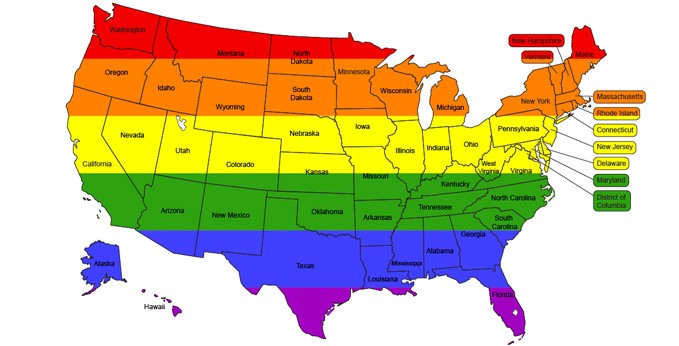 I smiled and nodded. “You helped do this, you know. You helped make this happen.”

The looks on their faces—the wonder, the pride—those are reason enough to celebrate this win.