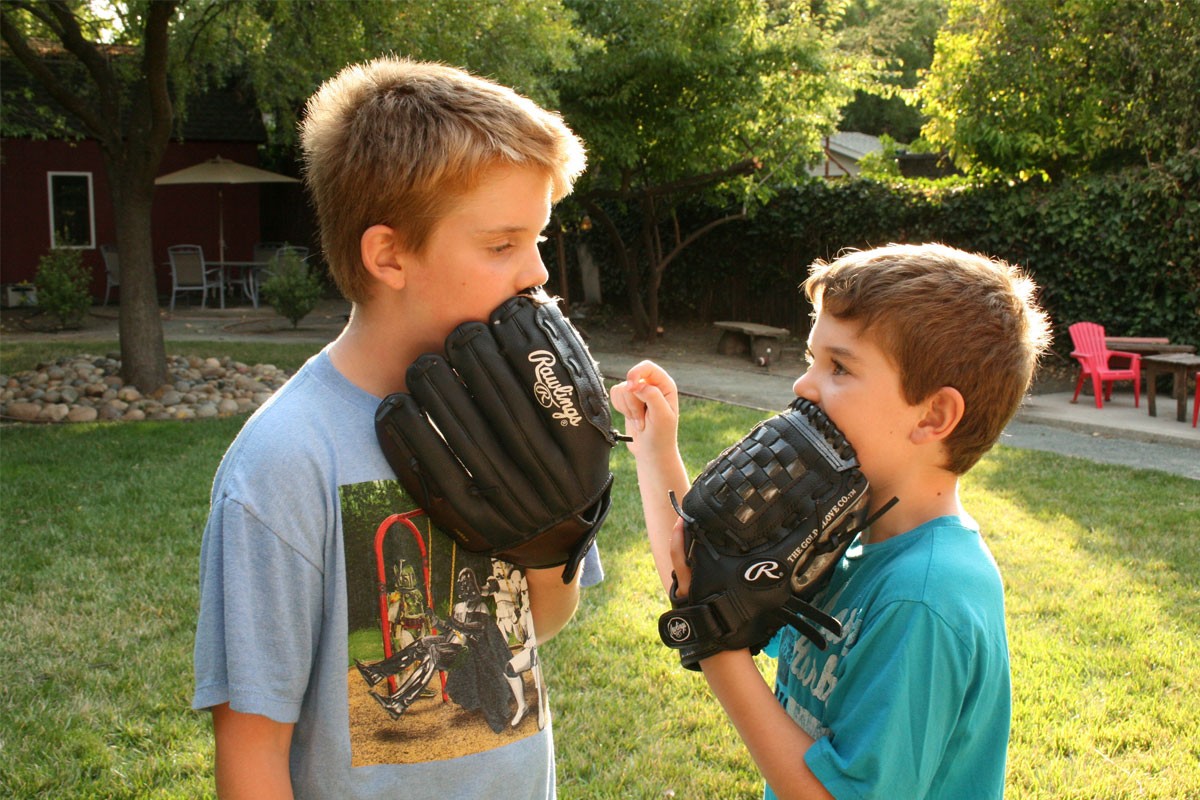 My sons have changed the lyrics to Don Ho’s classic “Tiny Bubbles” to “Tiny Buttholes.” They are singing it, at the tops of their lungs, at the breakfast table, again. My esophagus refuses to swallow another bite of scrambled eggs until the “butthole” image is erased from my mind.

I have a choice to make. I can shout, “Enough!” louder than they’re singing, my voice echoing off the kitchen ceiling. Or I can meet them where they are—in Tweenville.

I point to his bowl of Cheerios. “Your breakfast.”

Song over. I win.

As a lesbian Solo Mom raising two boys, I often feel like an anthropologist dropped into an unfamiliar culture, scrambling to understand their rituals. But I’m not just an observer here. I need to understand the ins and outs of Boyville well enough to live with, work with, and help guide these two kiddos into a healthy, happy adulthood.

While every day in Tweenville feels like a new adventure in an ever-changing landscape, I have developed a few survival skills along the way:

1. Learn their language. My kids speak the languages of Dubsmash, Vine, Minecraft, baseball statistics, viral YouTube videos, Studio C, Kid Snippets, and Weird Al Yankovic. They shout “John Cena!” at random times, and if they ever tell you, “I have just one question for you,” you can bet they’re going to follow it up with “What are thoooose?”

In Tweenville, kids develop their own language with their peers. At first, I learned the language as a way of connecting with my sons. If they liked a YouTube video, I watched it, knowing shared attention bonds people. But now? I’m actively enjoying communicating in tween language. Who knew how fun it could be to steal a basketball from my kid, make a layup, then get all up in his face, growling, “You got owned, son!”? Or to make my sons laugh by quoting a favorite Studio C line at just the right time? These are my daily joys parenting tweens.

In a way, it’s an advantage, this not knowing. I’m less likely to project my own childhood experiences onto my kids. I’m more likely to presume I need to listen, observe, and ask the right questions (“So, what’s it like to be you these days?”), in the right way (a nonchalant tone), at the right time (when they’re nestled in bed for the night).

But sometimes the learning curve is steep, like when my son was being bullied by a girl (let’s call her Sassy) at school. I knew my son didn’t like Sassy. I knew she said mean things to him. I knew she had shoved him a couple times. But it wasn’t until I saw tears in my son’s eyes that I really got it: she was bullying him, he was asking teachers and playground supervisors for help, and no one was stepping up for him.

If Sassy had been a boy pushing a classmate around that way, the repercussions would have been swift. I know they would have because I have seen how our school handles boy bullies. But because Sassy was a girl, she could be the meanest of the mean without any consequences.

If I wasn’t listening, if I hadn’t seen the look in his eyes when he told me, I would have missed the chance to support my son.

3. Set your boundaries. Even though I meet my sons where they are, talking smack on the basketball court or cutting the butthole song short by pointing to a bowl of Cheerios, I’m still very aware that I am their parent, not their buddy. And they know that, too. My kids know the house rules, they know where the lines are drawn, they know why the lines are drawn, and they know I dole out consequences when those lines are crossed. I see it this way: Soon these kids are going to be bigger than me. Like, way bigger. So I need to establish the ground rules now.

4. Teach your lessons. We aren’t church people, my kids and I. I’m a Buddhist-influenced nature lover who believes in human kindness and the vast mysteries of the universe. But sometimes I wish we were church people because then my kids would be immersed in regular meetings with a community that supports the values (see above: human kindness) I want to pass on to my children.

I used to sneak these lessons into their days through bedtime stories, but as tweens, my kids are no longer interested in picture books with morals. In fact, anything that smells of a “values” lesson, they reject outright.

But they never reject YouTube videos out of hand. So when I see a particularly inspiring or touching video depicting young people making kind, strong, or brave choices, I say, “Hey guys, check out this video,” and we gather on the couch (which I secretly call The Church of YouTube), and the video captures their attention long enough for the lesson to sink in.

Like most parents, I had a lot of big ideas about what this parenting gig would look like, very few of which turned out to be true. But as I follow my kids, step by step, through their childhoods, learning along the way, I find the journey far more rewarding than I’d ever imagined. Even in Tweenville.