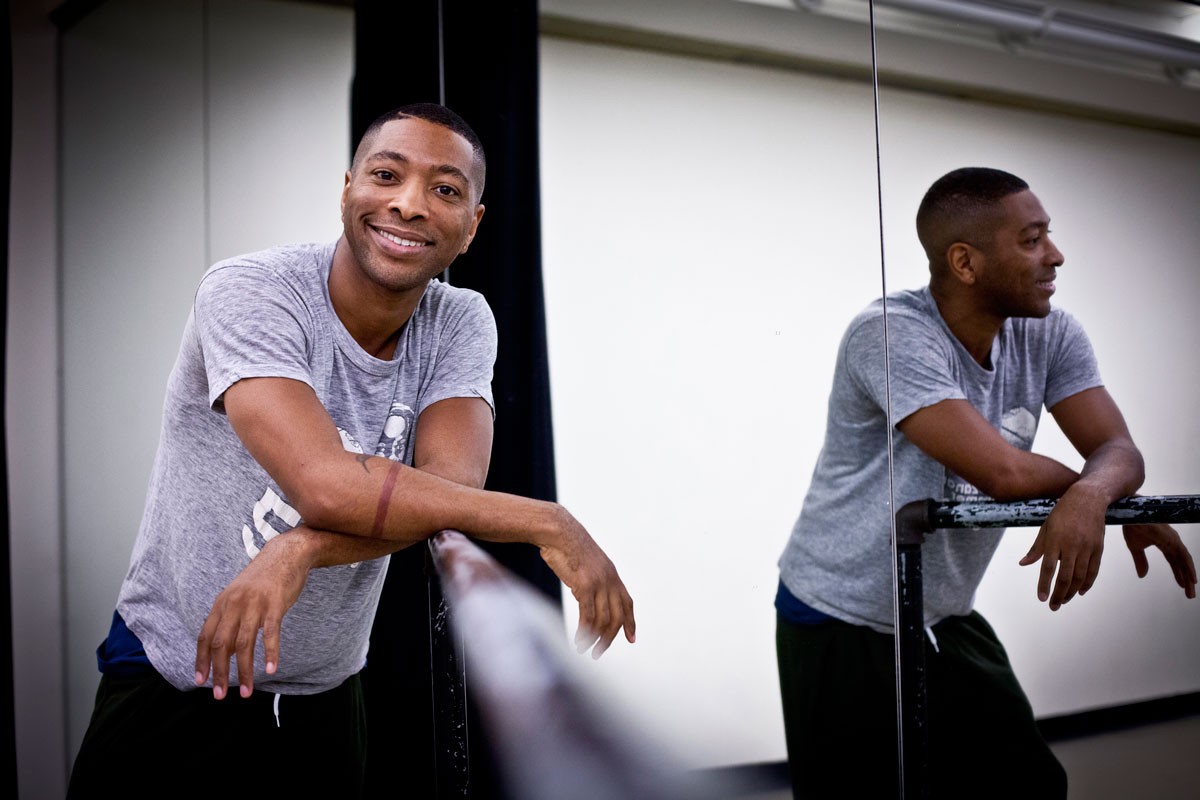 When a person is incarcerated, the individual, family, and community must grapple with inexplicable ramifications and feelings. Determining what to say and how to say it can be awkward and filled with uncertainty. Dancer, choreographer, and 2013 MacArthur Genius Grant–winner Kyle Abraham takes on this subject in a new work, “Untitled America: First Movement,” for the Alvin Ailey American Dance Theater. Moving and visually exquisite, the six-minute world premiere shown during the company’s 2015 winter concert was breathtaking—so much so that when the performance concluded, the audience gasped and audibly said, “That’s it!?” As audience members, we were committed to the visual, emotional journey we had begun.

In an interview with Abraham for the Marshall Project, “a nonprofit news organization that focuses on the American criminal justice system,” he shares that his inspiration for the project came from seeing his mother’s reaction to phone calls from her brother who was incarcerated. “Once the phone calls ended, the sadness set in . . . on both ends.” For Solo Moms, who are in a similar situation, accepting all the emotions that come with loss is challenging. A sense of grief and confusion can be too much to bear. It is hard to grieve the living or grieve what could have been. Abraham explores how that grief and pain live in the body and how people strive to go on for themselves, their families, and their loved ones who are in prison. Although words often fail, this piece shares the unspeakable burden between the two ends of communication.

Communication between people who are inmates and those at home has been complicated by policies that restrict privileges between people in prison and their families, as well as burden the families with outrageous financial costs. Visitation hours are restrictive, and people often are incarcerated far from their communities. According to the Council of State Governments Justice Center, on average, fewer than one-third of prisoners receive visitors. Travel is cumbersome and inconvenient, especially with children, which leaves families to maintain a phone-calling ritual. The Campaign for Prison Phone Justice had fought against the for-profit prison system by illuminating how the majority of the costs passed on to families for phone calls—upwards of $17 a minute in some cases—had nothing to do with the phone service that was provided. This is debilitating to these families who are mostly low income. State prisons were contracting with single phone companies and receiving kickbacks. Fortunately, the Federal Communications Commission (FCC) has recently ruled to cut these rates with the hope of relieving the burden. The efforts of many organizations aim to make sure the bond between families does not end with incarceration. Keeping families together is a necessary element to fighting recidivism.

Abraham often explores issues of social justice in his work; this piece is no exception, offering a window into the isolation, sorrow, and hopefulness that comes with long-term separation. Incarceration in the black community is an ongoing social-justice issue in this country. In 2010, civil-rights lawyer and legal scholar Michelle Alexander wrote The New Jim Crow: Mass Incarceration in the Age of Colorblindness (The New Press, 2012), which chronicles how the criminal-justice system in the United States is creating a new “caste system” by targeting black men through the War on Drugs and, as a result, decimating communities of color. Alexander shares that the total incarcerated population in the United States is 2.4 million, which is a 500% increase over the past 30 years, and one in 28 American children has a parent who is behind bars.

The statistics are reminders of the physical toll of incarceration, which Abraham explores through his work. His process of creation included watching video interviews with people who were former prisoners to see their body movements, which he then transformed into choreography. Supported by heartfelt, original music created for the performance by Laura Mvula and Steven Brown, the three female dancers—Jacquelin Harris, Hope Boykin, Danica Paulos—deftly blend hip-hop and modern dance technique to bring to life the characters in this first part of a three-movement dance. Simply dressed in gray outfits, they move in consort but in isolation; each telling their individual story within a narrative of shared pain.

Describing dance is a disservice to its beauty, so watching this work is a must—a truly moving experience for any Solo Mom. Alvin Ailey American Dance Theater tours throughout the country. You can find more about the project on the company’s website, and you can watch an excerpt below.