Anneke Lucas Is Bringing a Quiet Revolution to the Prison System

Trauma-conscious yoga and its impact on people who are incarcerated

Anneke Lucas is the founder and executive director of Liberation Prison Yoga (LPY), an organization she incorporated in 2014. LPY brings trauma-conscious yoga programs to women and men who are incarcerated, prison staff, and those whose lives are affected by incarceration.

A native of Belgium, Lucas escaped from a child sex-trafficking ring at age 11 and moved to the United States when she was 22. She lives in Brooklyn, New York, where she is a Solo Mom to her 14-year-old daughter, Charlotte. She is writing a book about her life.

Q: Let’s talk about how you came to teach yoga in prisons.

A: I never intended to teach yoga at all! When I started doing yoga [at age 30], I realized I’d found the perfect physical therapy for me. My body was badly injured when I was a child, and all of the elements of yoga—the breathing, meditation, philosophy, and physical activity—were the beginning of healing for me. It began to heal me psychologically as well. That practice gave me the largest possible perspective in which to place my past. Eventually, I started teaching yoga to people who had trauma, and when I was asked to help with a prison yoga project in San Francisco, I had a vision of an organization that would train and support teachers to go into prisons in New York and teach yoga to people who are incarcerated.

Q: You work in some of the most notorious prisons in this country. Why do you think you are drawn to working with people who are incarcerated?

A: They have been through the kind of extreme, violent trauma that I’d experienced. I connect very deeply to them. Having had the privilege to heal for many years, I can meet them wherever they are emotionally. For me, I was only able to open up when someone was unexpectedly kind and not judgmental. Suddenly I felt that I could be loved, that there was nothing necessarily wrong with me. That’s the kind of work we’re doing with the inmates—allowing them to be fully understood without judgment. That is very powerful for someone who has never felt understood in their lives. The healing goes both ways, too; doing this heals me exponentially.

Q: How is it different working with women as compared with men in the prison system?

A: All of them are afraid and feel they cannot be loved. I had to learn to have boundaries—at first I identified so heavily with the inmates that it was like us against the authorities, and that wasn’t helpful. For the men, yoga isn’t typically macho, but once they’re there, they realize how challenging it is. These men are humiliated so much all day long, they survive by not showing weakness. But when we get them in a group, we talk, and the honesty and courage I observe is very moving. It takes courage for them just to show up.

The women tend to be more primed to have the courage to look at the things that happened to them, with fewer barriers coming in, because they’re always dealing with their vulnerabilities as women in a sexist world. They’ve had no choice, in a way, but to learn to live with their vulnerability. For the men, it’s harder to get over the belief that they have to “be a man,” that they can’t be vulnerable.

Q: What about the corrections officers (COs)? How do they react to you?

A: Sometimes one or the other is not respectful. There are good ones and ones who abuse their power. It’s not their fault. They’re often damaged in the same ways as the inmates. The COs have no conflict-resolution skills. I see them engaging in familiarity and arguments with the inmates. If they were taught nonviolent communication and mindfulness, that would change things.

We work on a ward for women who have mental illness who were in solitary confinement. One time the corrections officers were watching and laughing at us, mocking me. I asked them to be quiet, and they got louder. One of my students, in my defense, started yelling at the CO. Thankfully, she stopped and didn’t get in trouble. Now we are teaching a class for COs in the Tombs, the Manhattan Detention Complex, and are starting another in the Metropolitan Correctional Center, a federal prison.

Q: Do you work with women who are victims of sex trafficking?

A: Yes. We do meditation and structured sharing. Many women share for the first time in their lives. They’re scared, they’re protecting their pimps, [and] they expect to go back to that life once they’re out. One woman in a group found the courage to seek help and leave her pimp. Another went into a drug-rehab program. When a woman’s power is uncoupled from her sexuality, we will see the dawn of liberation. The bond in these groups is powerful. So much strength comes from knowing you’re not alone.

Q: Beginning when you were six, your mother “rented” you to pedophiles who abused and tortured you until you had help from the inside to escape at age 11. You barely made it out alive. As a mother to a daughter yourself, how do you reconcile this horrific childhood with your ability to parent? 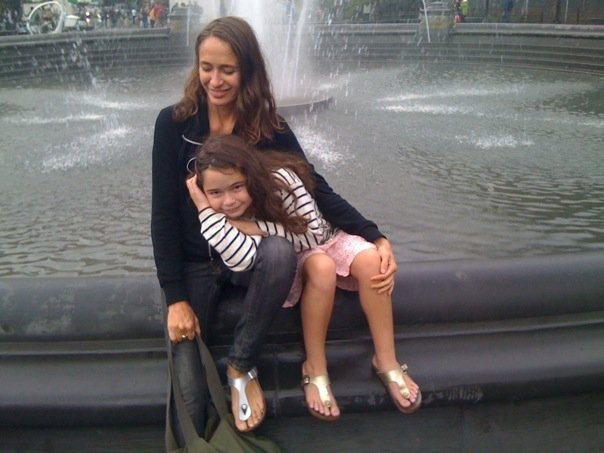 A: By the time I had Charlotte, I was in therapy and doing yoga every day. I found caring for her as a baby rewarding; I became confident in my own intuition and ability. When Charlotte’s father and I broke up when she was three, it became very hard. I had no friends or family, my therapist got sick, and I was completely isolated. I noticed that my anger was starting to come out at her. I knew I had to stop. I had to go deeper into my healing in order to be there for her. This sent me further into my past, and I got in touch with more memory, more understanding, more suffering. We had joint custody, and I would go through this incredible grief when Charlotte was with her father. I was able to experience joy when I was with her. I would never have done that hard work without her; I would have killed myself first. So it’s thanks to her that I’m here. And she is great. She’s very smart and interested in learning. She hasn’t had it easy, but she has friends, and she’s found herself.

Q: Does she know about your past?

A: I have not explained it to her yet, but she has guessed at it. She wanted to know why she couldn’t meet her other grandmother, and I had to tell her my mother was dangerous, that she would leave me with strangers and couldn’t be trusted. I did try, as an adult, to have a relationship with my mother, but she’s not completely sane. She had her own traumatic past and was never able to see me as lovable or innocent, even as a baby. That hasn’t changed. She doesn’t deny what she did to me, but there is nothing for me there.

Q: How do you go from existing in a kind of reactive survival mode, as many people living with trauma do, to living a meaningful life?

A: There is a certain faith and grace and humility that results from being in the worst possible circumstance. Often we work with people who are very spiritual, in spite of the injustices they suffer. They almost have no choice but to be spiritual. As a child, while being tortured, I always had great faith that there was a presence to guide me. When such violence is being done to your body and you are still alive, you know that you are more than your body, that your strength comes from something greater. There is such a thing as post-traumatic growth [where traumatized people undergo a shift in their worldview that is deeply beneficial]. For example, I’m much more in touch with who I really am. I feel closer to loved ones. I feel braver to do what I want to do, not what is expected of me. I’m able to stand in my power. It’s the same for the people we work with who are incarcerated. They’re able to see themselves getting stronger as they move through these difficult challenges.

In this work, we try to accept everyone and let people know that they are essentially good. They’ve internalized this voice that tells them they’re bad or evil. They’ve been dehumanized by their experience. In order to justify harming someone, you have to vilify the victim. I was reviled as a child by my abusers, assigned this evil power I didn’t have that made me feel culpable. It’s what abusers do. It’s what terrorists do. It’s what dictators do. We’re helping people who are incarcerated find another way to be themselves that is not monstrous but healed. A woman I taught said, “You made me remember how I was spoken to as a child, and to know that [voice] is not my voice is so powerful. I’m going to think about that every time I hear it now.”