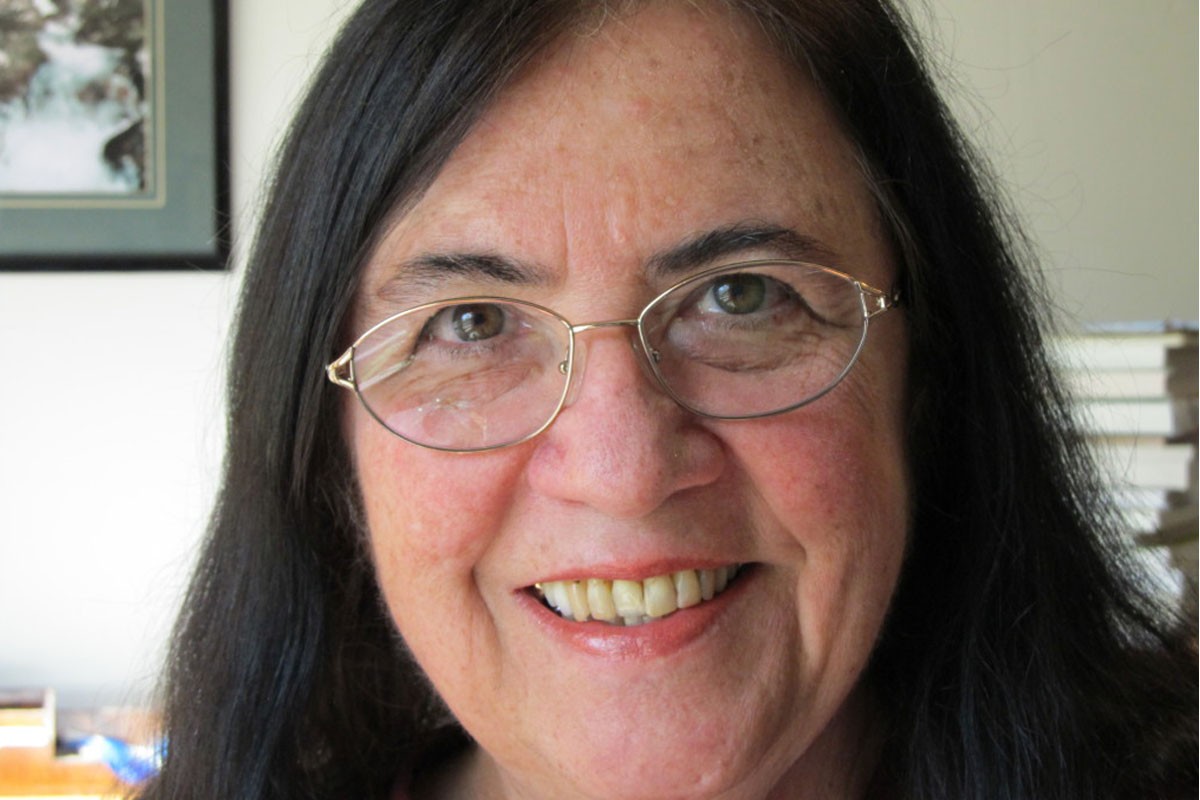 A story of survival and caregiving in a time of need

Writer Marylee MacDonald became a widow and a Solo Mom when she was in her 20s. Decades later, when her son-in-law, Joe, was diagnosed with amyotrophic lateral sclerosis, or ALS, MacDonald knew some of the challenges her daughter, Jackie, would face as Joe’s illness progressed and Jackie became, effectively, a Solo Mom. MacDonald stepped in to help as a caregiver. Her goal was to help her family survive. In the following interview, Marylee discusses her journey from Solo Mom to caregiver. She describes the excruciating burden that a debilitating disease places on a family, including the toll that a caregiver experiences. And yet, she does more than survive: she provides for her own daughter and their children while also writing, which helps sustain her. Ultimately she draws upon her experiences to write a novel, Montpelier Tomorrow (All Things That Matter Press, 2014). Read on to learn more about her remarkable story.

Q: When you were in your mid-20s, you were widowed. Can you describe the circumstances that led to your becoming a widowed Solo Mom? How old were your kids?

A: After my husband, John, finished his PhD at Stanford, he got a research fellowship in Germany, and we figured that would give us a way to travel around and see Europe. At the end of that year, I was pregnant and had horrible morning sickness, so he volunteered to pack up the house and let me fly back to California with our three kids. Shortly before Christmas in 1971 the phone rang, and I learned he’d been killed in a car accident. It was his last day of work, and he and his best friend were heading to the local Gasthof [an inn or tavern] to celebrate. My kids were seven, four, and two, and I was six weeks pregnant.

Q: Can you tell us about your experiences as a Solo Mom?

A: Well, let’s say that for seven years I raised my kids by myself. Luckily, John had some life insurance, so I wasn’t totally strapped for cash, which is the situation for many Solo Moms. I went back to school, got a master’s in English, and worked as an editor. About three years into that, I looked at my checkbook and realized I couldn’t pay my bills, so I made a career switch and began working as a carpenter. A lot of English majors in the San Francisco Bay Area were doing the same thing, and I thought, If they can do it, so can I. Working in a nontraditional field meant I could earn a living wage and didn’t feel so desperate when Christmas rolled around.

Q: When Joe’s ALS was diagnosed, did he and your daughter already have kids?

A: My daughter’s situation was eerily similar in that she was pregnant with her second child when she learned her husband had a fatal disease, but unlike me, she was the family’s main breadwinner. Her husband was a guy with a big, big heart, and he worked as an environmental lobbyist for a nonprofit. His earnings couldn’t have paid the bills. My daughter was pretty close to her due date when she found out, and their second child was born soon after she learned her husband was going to die.

Q: At the time, you lived in the Midwest and your daughter lived out East. Did you or Jackie know much about ALS when Joe was diagnosed? What went through your mind when you learned the news?

A: Because of the impending birth of her second child, I was actually out in Washington, DC, when Joe got the news. I didn’t know anything about ALS, nor did they, really, even after the doctor gave them the bad news. The only piece of information that stuck was that he had a year to live. A year to live! He was only 34! I knew immediately that my daughter faced huge challenges, but I also knew intuitively that her situation was much, much worse than mine had been. Losing my husband was like having a limb amputated. It’s much harder to watch the man you love die slowly.

Q: How did you get involved in caring for your son-in-law? How did that work—did you move out East or visit for extended periods of time?

A: I flew back and forth for about a year and arrived with suitcases of frozen casseroles. In any situation where you’re powerless to stop the bad thing from happening, the human impulse is to provide food. But Joe wasn’t starving. This wasn’t a famine. After a time, he could no longer feed himself, climb stairs, or go to the bathroom on his own. He couldn’t be in the house by himself, so I moved out to be his caregiver.

Q: As you saw your daughter starting to, effectively, become a Solo Mom, did your own experiences as a Solo Mom inform your efforts to provide care for your son-in-law and the family as a whole?

A: Well, sure. My daughter had to keep working and that meant eight hours away from her two small kids. I could lift her burden by taking care of her husband and by putting dinner on the table. But the physical needs of a person with ALS are so great that I couldn’t do more than that. The kids had a nanny. Friends helped with errands like taking clothes to the cleaners.

Q: How long did you provide caregiving services for your son-in-law? What did that involve?

A: Full time? Ten months. I fed him, and that took six hours a day. I had to be extremely careful because he choked a lot. I took him to the bathroom and wiped his ass. I got him ready for bed, and that meant brushing his teeth, washing his face, pulling boogers from his nose, and putting on his pajamas. It meant lifting him onto the bed—he was pretty much a dead weight—and then putting on this device he wore at night called a BiPAP. It helped him breathe.

These tasks were physically exhausting. The baby woke up at night. I was sleep deprived, and so was my daughter because she slept next to her husband and had to adjust the BiPAP at night, scratch his itches, and straighten the sheets. I could see that my daughter was getting more and more worn down, and there didn’t seem to be any end in sight. My son-in-law didn’t die within the year. In fact, he lived to see his wonderful sons grow up—14 years.

Q: It is sometimes said that women usually end up in the caregiving role in family situations, and the role is generally unpaid. Do you think this is the case, and, if so, why do you think that is?

A: Women are genetically programmed to stick around the hearth when children are young. Biologically, the child-rearing years occupy the largest portion of a woman’s life, at least that was true prior to birth control being widely available. If you think about our ancient ancestors, it would have been impossible for a breastfeeding mother to go out on a hunt for the woolly mammoth.

But, to address your point about why caregiving is unpaid, I think it’s because we take on these caregiving roles out of love. Health-care policy in the United States is based on exploiting our goodwill. Think about how quickly our health-care system sends people home from the hospital. Just as a point of comparison, Britain, Canada, Belgium, and Australia do provide a financial benefit for caregivers. In Britain, there’s a “carers’ allowance” paid to anyone caring for a relative over 65. (Oh, gosh, that’s me! Stay back, kids, stay back! I’m OK for the moment.) Some Canadian provinces provide tax credits. And, there’s a movement in Australia to provide housing and care for the disabled young.

A: To survive. For all of us, that was my single priority. I wanted my daughter to be able to go on with her life and not have any regrets. I wanted the kids to have happy memories of their father. And, for myself, I wanted to keep from derailing my whole life. Despite the boredom and busyness and stress and exhaustion, I had to find time to write. That is what I do. I’m a writer. And writing kept me from feeling like a martyr.

Q: Your experiences informed your novel, Montpelier Tomorrow, which was released in 2014. Can you tell us a little more about the book?

A: I’ve had readers (former caregivers) tell me that reading the book helped them forgive themselves for not being perfect. Colleen, the main character, is a gal who makes lots of mistakes. The book has won a number of prizes, including a Gold Medal for Drama from the Readers’ Favorite International Book Award. It’s currently number one on Listopia’s “Books You Need Tissues to Read” and “Non-Chick Lit for Women.”

Q: You have a caregiving blog: blog.maryleemacdonald.org. What were your takeaways from your experience? How did acting as caregiver affect your life? Did it change the way you viewed caregiving?

A: I became very aware that the caregiver’s health is compromised by long-term stress, and I have a blog post about research on why that is so. Women who do prolonged caregiving shorten their lives by seven years, and most people don’t know that.

I also became enraged that neither government nor insurance policies help families coping with illnesses that require 24-hour care.

A: First, keep the focus on the children. A prolonged health-care crisis can swamp a mother’s desire to be there for her kids, but it’s more doable if you spread the burden. Call on a friend to set up a “caring circle” using one of these smartphone apps.

Second, use simple ways to reduce your stress by posting my tips on self-care on your refrigerator.

These are Band-Aid solutions, I realize. What we’d all like is to have a fairy godmother swoop in and take the overwhelming challenges off our hands.

It may feel like the pressure will never let up, but then, one day it does, and you get your life back. Until then, just do the best you can. That’s all any of us can do.