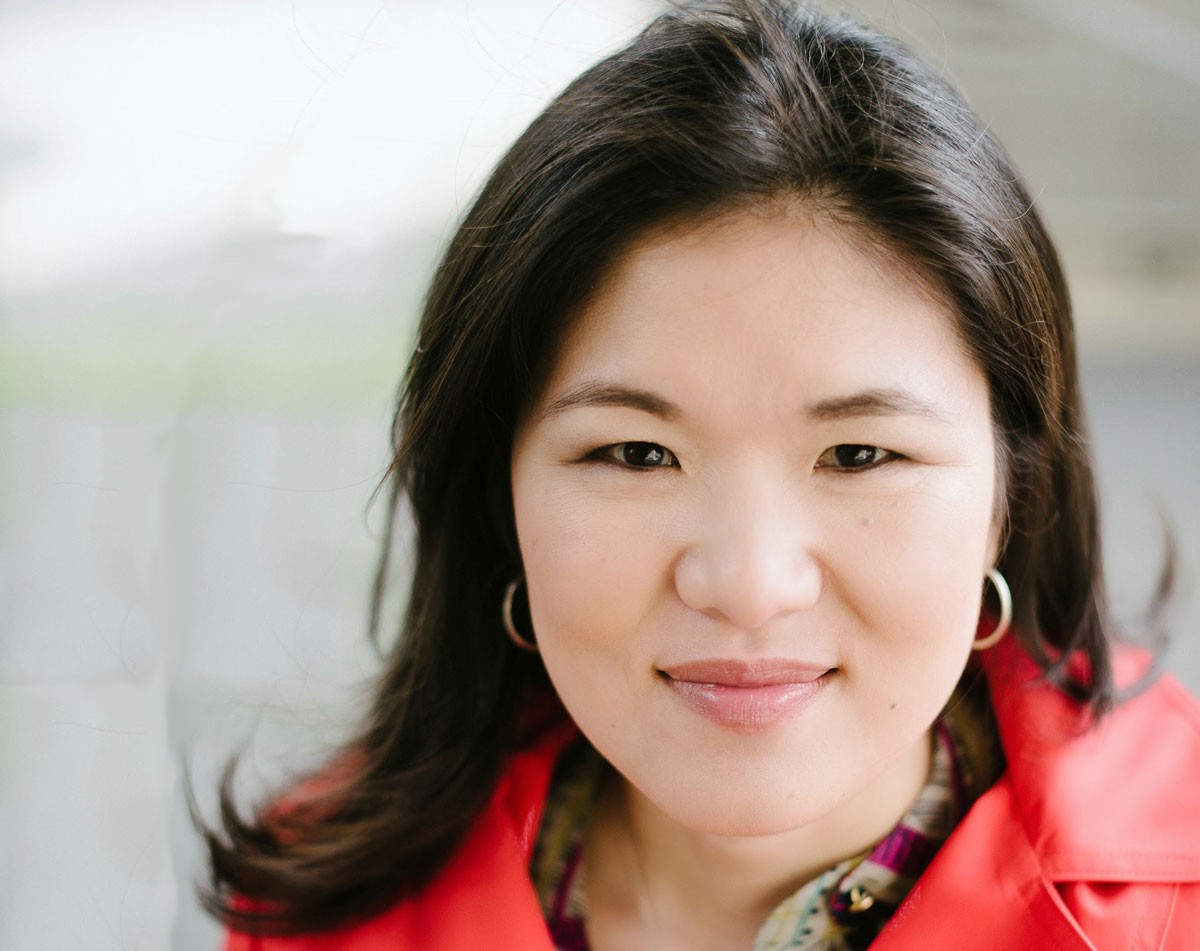 Born in 1974 in South Korea and left on the street, Kristin Meekhof was adopted by American parents, Nancy and James Vande Vusse, four months later. When she was just five, her father died of cancer, making her mother the first widow she knew. A few years later, her mother remarried Larry Meekhof, and she was adopted a second time.

Currently, Meekhof is a licensed clinical social worker with a bachelor’s degree in psychology from Kalamazoo College and a master’s degree in social work from the University of Michigan.

In 2007, when she was just 33, her husband of four years, Roy, was diagnosed with adrenal cancer and died just eight weeks later, leaving her a widow.

Meekhof spent the next three years interviewing widows from all walks of life, blending their narratives along with practical advice in her book, A Widow’s Guide to Healing (Sourcebooks, 2015).

Kristin and I had the opportunity to visit via telephone—me in sunny Los Angeles, and she in the midst of a Grand Rapids snowstorm. Weather envy ensued.

Q: Do you think you’ll stay in Michigan forever?

A: I have a really good job as a social worker, and with the book, I don’t want to have another transition. But I’ve lived here my entire life, and for some reason, every year at this time I complain about the snow. I should be used to this. I might go to Florida for a long weekend.

Q: I was married long ago and only for a short time, but although I haven’t shared your loss, reading your work took me there, and I could imagine how it felt to have your experience.

A: Both of my grandparents were alive when my dad died, so my mom was the first widow in my life. For as long as I remember, he was sick and confined to a wheelchair, and she was his primary caregiver. She did double-duty, working and taking care of my dad and me. She was really always a single mom.

My father couldn’t work. We struggled financially. We were on food stamps. My mom worked full time as a teacher, then had to go to part time when he got really sick.

Q: Did you and Roy have a good marriage?

A: Yes. I was really, really fortunate. I met a lot of widows that didn’t.

Q: Your husband also had cancer?

A: He had adrenal cancer. I did not know you could have absolutely normal blood work and have advanced cancer. He went in with a cough that wouldn’t go away. At first they thought it was bronchitis. They tried everything, but it turned out it was advanced cancer that was already in his lungs. Adrenal cancer is ultra-rare. There’s a one-in-a-million chance you will get it. Three weeks before he died, we started doing palliative care (pain management) for physical relief of the symptoms of the cancer. We set up hospice at home, and I was the primary caregiver through that time.

Q: What sort of support did you have?

A: Thankfully for the Family and Medical Leave Act, I was able to take off work from the time we learned it was terminal—four weeks total.

My very good friend, Wanda Walters, worked at a hospice and helped me set up everything. She lives about 40 minutes away, and she would stay with me to help and walk me through it all. I had no medical or nursing experience, no caregiving experience. I’d never worked in a hospital. I had no frame of reference. Wanda is about 28 years older and sort of a mother figure. She’s a really, really good person.

She was also there for me emotionally, as were my two uncles who I am close with. Looking back, I don’t know how I got through it. Going back to work helped because it was a distraction during the day. I was doing a lot of reading. I went back to running. I did yoga. Sometimes I would feel better after yoga. Sometimes I wouldn’t. But there [was] no one thing that worked.

Q: How did you process your loss?

A: My husband died in 2007, and for the three years that followed, I read everything I could get my hands on about grief and dying. I was curious about it from an academic standpoint because I have a clinical background. I was interested in the psychological impact and the physical effects of grief. I’ve always been a student in that I move toward learning. I’d go from one academic journal article to the next. I didn’t know about broken heart syndrome. I didn’t know about the physical effects that people actually feel with grief and loss.

Q: What are the physical effects of grief?

A: Within two weeks of the funeral, I ended up with bronchitis, a double-ear infection, strep—I was a mess. Grief lowers your immune system, and you become susceptible to a lot of illnesses.

With the widows I interviewed, many had panic attacks, migraines; some had physical symptoms; some could not get their appetite back; they couldn’t sleep; some gained weight; some started smoking or drinking.

In September, I was at the ABC headquarters in New York, and we did an hour-long Twitter chat about the physical effects of grief and broken heart syndrome. I’d found a lot of academic articles and information online; we got a lot of hospitals and other professionals to join in and share what can happen to the body and the mind when a person dies. The chat was extremely successful.

Q: What prompted you to write the book?

A: When he died, I was going through a book a week. I think it helped me. I’ve always identified very strongly with knowledge. I find comfort in knowing more. Looking back, I think I was trying to understand things better. I would even read People magazine articles on people who died.

But I couldn’t find anything that was the narrative of widows. After about three years, I realized there was nothing out there with the narrative-research approach.

Q: How many widows did you interview, and how did you find them?

A: I found them very organically. I interviewed over 100 widows over three-and-a-half year’s time. I would interview one widow, and she would say, “If you think I have a good story, you should speak to so and so.”

Lee Woodruff, the wife of [television journalist] Bob Woodruff, does a lot of work with military wives and widows, and she tweeted that I was looking to interview widows, and a lot of women responded. One interview would lead to the next. That’s how I knew I was onto something. So many of the women told me they were looking for a book like this and couldn’t find it, either.

In fact, I had a literary agent, and we had competing publishers. There was the big New York publisher with the more seasoned writers and the smaller indie publisher who would maybe give me more attention. Because I always believe strongly in indie work and indie bookstores, I went with the smaller publisher.

It started with an essay that I blind submitted to the Huffington Post about my late husband and the grief/loss process. They felt it was compelling enough to share on their social media.

Q: I imagine you got to meet a lot of remarkable women.

A: No two stories were alike. I’m still interviewing widows because I believe we can learn from each other.

Q: What were some unexpected issues that arose from widowhood?

A: The emotional component of the strained relationships that came after: friends that could not be there to support me emotionally—that was very hurtful. There was a definite shift in my community. I was 33. Our friends were still having kids. So I understand they didn’t have a frame of reference. But being emotionally unavailable to me hurt very badly. In psychology we call it “secondary loss.” The primary loss is with the death; anything that comes after, whether losing your home, your job, or a friendship, those are all secondary losses.

Even the widows I interviewed said the same thing about secondary loss. When I wouldn’t get invited to things, I felt bad. Later someone pointed out, “It’s you as a couple that’s not being invited.” This depersonalized it a little, so it softened the blow, so to speak. I’d never been through this before, so socially it was harsh.

Q: Have you been able to make some new friends?

A: Yes. I joined a running group. I’ve done a marathon and several half marathons. I went back to yoga. I tried a support group. It was not for me. Most of the women were mothers, and I’m not. And there was a lot of complaining. I didn’t connect with that. I didn’t have anything to complain about. I’d feel worse after the meeting than when I walked in.

Q: How are you feeling now?

A: It’s really interesting to be in this place that I am in. I’ve developed a lot of relationships from the book that have nothing to do with being a widow. I never thought the book would open up so many opportunities for me. It’s all very new.

Q: You weren’t a professional writer before, and you’d never written a book—how did you know what to do?

A: I didn’t. I’d read so many books that I kind of knew what I wanted it to look like. I could visualize it as I was doing the interviews, but I really had no idea. I did it like my job. I’d do my hours at work, then write at night and on the weekends. I put in some solid hours writing or doing the research. It is a job! I don’t even know what’s on TV right now.

Q: How many hours a night do you sleep?

A: Probably six and a half. But since the loss, it finally felt like I had something that was satisfying, deep, and gratifying that would be my new purpose.

Q: Have you stayed in touch with the women you interviewed?

A: Oh, yes. Not all of them—that’s impossible—but some. That’s been equally gratifying, having friendships with them.

Q: Will you write more?

A: I’ve published probably 100 articles between when I finished the book to when it came out. I was doing what I needed to do to keep going.

Q: How do you see your future?

A: I have no idea. Everything’s changed with the book. I would like to write a completely different type of book. I’m always interested in social-justice issues. I recently joined the board of the cancer center where my husband was treated.

I went to Kenya to see how widows live on less than a dollar a day. I’m curious globally how widows are affected—financially, socially, politically. It’s the old-school social work and social-justice issues that are a big part of who I am. I was able to meet with Lord [Raj] Loomba of the Loomba Foundation (an organization that promotes the economic empowerment of disadvantaged widows and the education of their children), and he invited me to a United Nations event, as his guest, where he spoke about the rights and freedoms of widows and their children.

Q: So you are basically an advocate for widows?

A: I hope so. You never know what sort of impact you have.

Another source of support is our confidential community of Sisters, where you will find Solo Moms who understand.