Book Review: “What Comes Next and How to Like It” 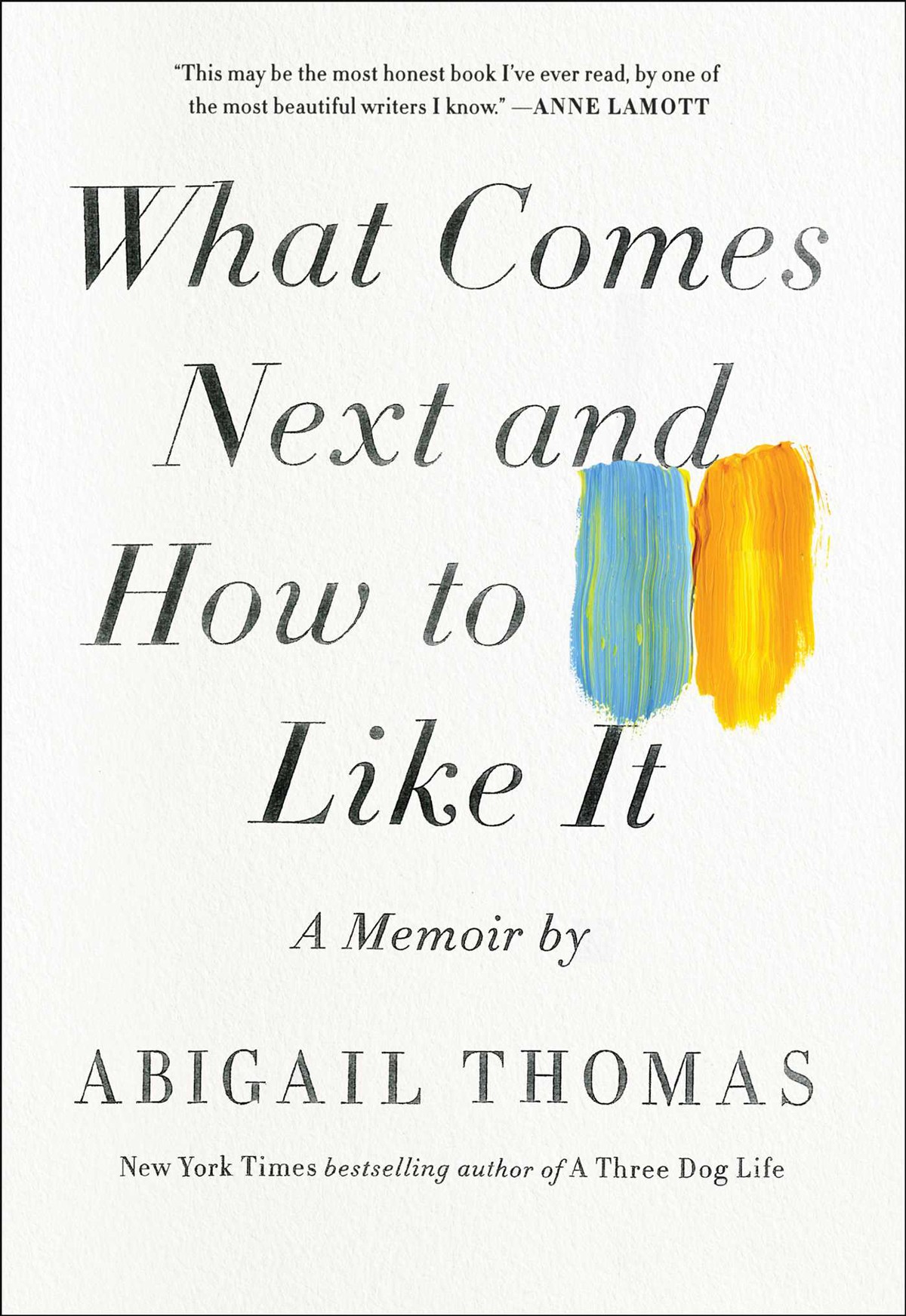 A memoir about love, loss, and relationships by Abigail Thomas

About one-third of the way into Abigail Thomas’s What Comes Next and How to Like It, the author has coffee with a woman who worries about the future. “I worry about what would happen if [my husband] got sick or I got sick, I worry how we would manage,” Thomas’s companion frets. She speculates that her future has shrunk, and when she wonders if other people worry about the same things, Thomas’s response is frank puzzlement: “I never think about the future at all,” she says.

Thomas left the meeting feeling sorry for her companion, “a woman wasting a perfectly good afternoon worrying about something that might never happen.” Though she had to concede that the death part would eventually catch up to her, she was hard-pressed to get worked up about it. As she walked down 59th Street, the future receded, and Thomas let herself be drawn in by delight and spectacle: by the time she passed a splendid figure dressed entirely in gold, she had forgotten to even think about the future in favor of the present. Oh, New York, she thought, I love you so much.

It wasn’t that Thomas hadn’t already faced her own share of devastating loss. She had: her beloved third husband, who was hit by a car, had sustained permanent brain damage and then died seven years later. But Thomas, who had years before raised four kids as a Solo Mom, distinguishes between worry and grief. As she writes, “I don’t worry about my husband, the worst that could happen to him already happened.” Life’s lessons have seemingly inured her to fears of mortality.

But then later in the book, Thomas’s adult daughter Catherine gets cancer. Her cancer is something called “triple negative,” which means resistant to standard treatment and which is, as one pamphlet helpfully points out, “likely to recur.” Catherine navigates months of surgery and chemo and—spoiler—does get a clean bill of health. But Thomas recognizes that somewhere along the line her own worldview has changed. “I admit dread has taken up residence,” she writes. “My daughter has been free of cancer for a year, but I’m still afraid of what can come.”

What Comes Next and How to Like It, which traces an arc of decades, is about learning to navigate that dread. It’s also about what helps us do it. A memoir, necessarily, is about memory, though Thomas concedes that her own is riddled with inaccuracy. “Great chunks are falling away, like cliffs into the sea,” is how she describes memory loss, with characteristic self-deprecation. And that’s one of the great pleasures of this memoir: sometimes it reads like poetry.

The chapters are spare but not slight: Thomas has a habit of sneaking up on you with revelations. She might be talking about her dogs one moment, but then comes the realization that what she’s really talking about is cancer, or alcoholism. Her epiphanies sneak up on the reader much the way they seem to have snuck up on Thomas herself. And much the way that aging, loss, and mortality sneak up on us all.

Therein lies part of the brilliance of What Comes Next and How to Like It: Thomas isn’t telling us that death and the breakdown of the body don’t exist. They do, and she is spectacularly honest and unsentimental about that reality. As she says, “Truth is what I’m ultimately after,” and if memory sometimes softens or blurs the facts, she’s determined, to the best of her ability, to define life’s truths clearly. “Writing is the way I ground myself,” she remarks. “Writing is a way to fathom what we have lost, to make sense out of what makes no sense.”

Death and loss are heavy topics, but Thomas has a light touch and a refreshing gallows humor: she’s not one to rhapsodize about rainbows. One spring day, faced with the sheer loveliness of the season’s soft greens, pinks, and yellows, Thomas in fact feels oppressed by all the beauty. “I was being force-fed a spring morning,” she writes, “even the oxygen was divine.” Her response? “[F]inally I went inside and watched The Exorcist.”

Learning to know oneself—and doing the work to know others—seems part of Thomas’s journey. A cornerstone of the book is her relationship with lifelong friend Chuck Verrill. At one point, Verrill, who is married, and Catherine, just out of college, have an affair; neither tell Thomas, and in the affair’s ruinous aftermath (which includes Verrill’s divorce), Thomas has to resolve issues of betrayal with two of the people she loves most in the world. She doesn’t necessarily realize the extent of the damage at first, and it takes work to rebuild trust between herself and her best friend, and between herself and her daughter. “It was hard work, like chopping wood, but we kept at it,” she writes at one point about reestablishing a friendship with Verrill. In some ways, it takes years to work through the anger. But the work has value. Thomas eventually feels that “[Catherine] is my daughter again, and I am her mother.” She is relieved when she and Verrill find their way through; as she notes drily, “It’s too late for either of us to make another old friend.”

Those relationships are invaluable as life, with its complicated joys and setbacks, powers forward. And as Thomas begins to understand, on a visceral level, the plight of the woman who dreaded the future, as she begins to dread the possibility of losing those she loves, she also begins to understand that “I need to find a way to live with that.”

If endurance seems to involve a certain acceptance, it also involves gratitude. “I have learned that to be witness to one another’s lives is the greatest of gifts,” Thomas writes near the end of the book. That witness might be profound: the birth of Thomas’s beloved grandchildren, for instance. But grace can also take prosaic forms. In one chapter Thomas, initially shocked when she stops by Catherine’s place and finds her daughter binge-watching the television series Supernatural at 10 o’clock in the morning, ends up sitting down on the couch, too, and not getting up again for hours. “It’s easy to find that five or six hours have sped by without my noticing,” she writes about watching the show. “I am having fun. This is not my world, these are not my fears. Supernatural is great storytelling, and it is not my story.” Best of all? It’s something she shares with a child she loves.

“Love allows for betrayal and loss and dread,” Thomas muses. And love, she implies, though imperfect, is something that can be counted on. When Verrill, who has a bad liver, reveals that his doctor is thinking of putting him on the transplant list, Thomas’s calm response masks her terror. “I’ll take care of you,” she tells him. “When you come home.”

What Comes Next and How to Like It is about enduring devastating setbacks, and—for the glorious time being—emerging on the other side. “I don’t know that we would have been as close as we are now without the breakage, the damage done,” Thomas observes of the strong triangular relationship that emerged years after the affair between Verrill and Catherine. “We have built something sturdy out of the wreckage.”

And maybe that’s the final takeaway. We can’t avoid pain; we can’t avoid loss and death. But, as Thomas writes, we can take pride—and joy—in the fact that we have endured in the company of those we love.