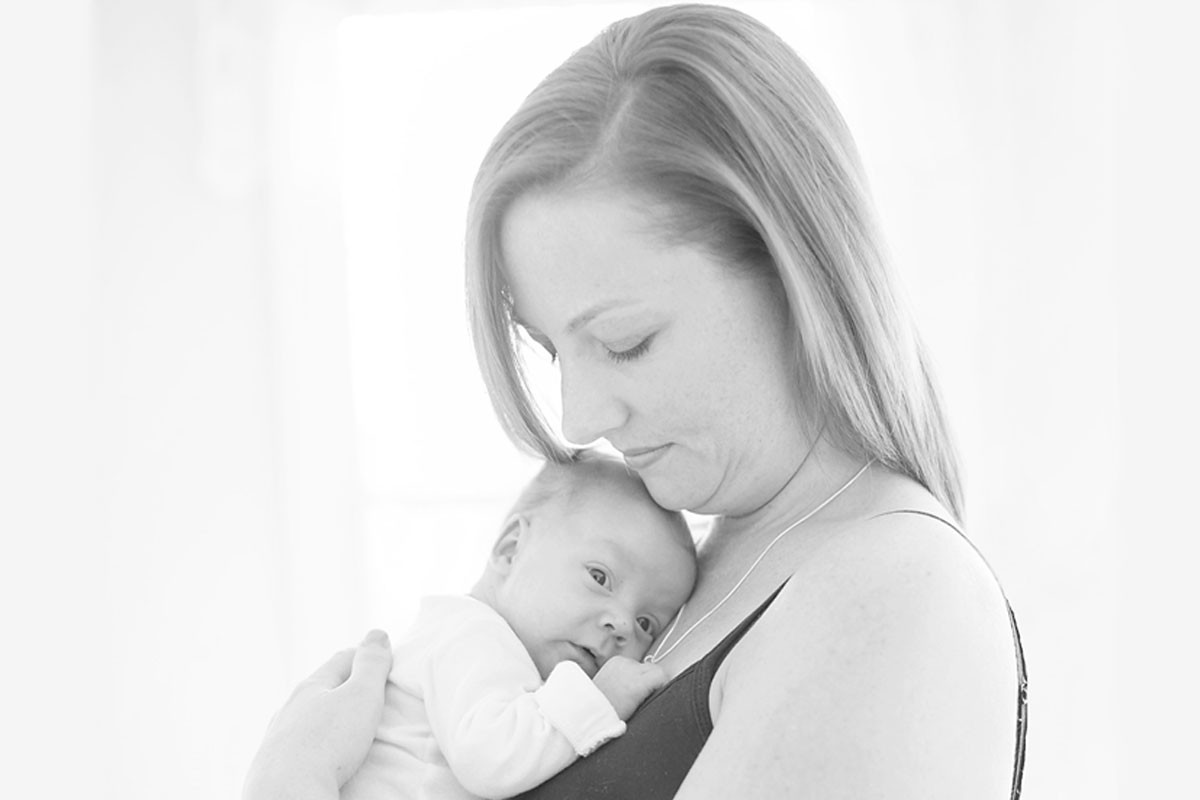 New Orleans–based writer, editor, and producer Sarah Netter is also the latest addition to the ESME family as our Adoption Resource Guide.

Born in Illinois and raised in Connecticut, Netter was living the exciting life of a reporter in New York City when, a year and a half ago, she decided to move with her son to New Orleans. “I wanted to be a different kind of mother. I wanted to raise my son in a community.”

Two years before that, she made a huge decision . . .

Q: What exactly do you do?

A: I am a writer. I work as a journalist and have a separate business where I do marketing.

Q: How did you get into this line of work?

A: I’ve wanted to be a journalist since I was a little girl. When I was 11 or 12, I watched Christiane Amanpour reporting from Iraq. I saw the bombs falling on Baghdad and thought it was amazing that, as a reporter, she got to witness and tell everyone about it. I wanted to do that, too.

I got to meet her when I was at ABC. We were in an elevator together, and I mustered up my courage to tell her she was the reason I got into journalism.

I grew up watching the greats like Peter Jennings, Charlie Gibson, and Diane Sawyer. Working with Diane for several years (at ABC World News) was mind-blowing. The other badass of female journalism is Martha Raddatz. She’s a mom and a grandma. She’s traveled the world with top military personnel and has been embedded. I thought, When I grow up, I want to be Martha Raddatz.

Q: Where did you go to school?

A: I attended Quinnipiac University in Connecticut. It was a small college with a blooming journalism department. I got a great education. At first, I worked at the campus TV station, but they seemed more concerned with my freckles and how I would cover them up. I wanted to tell stories, so I ended up joining the campus newspaper and found my niche. I was the editor in chief my senior year.

I had a wonderful mentor, Paul Janensch, who ran his classroom like a newsroom. You had to do word counts. These were the days before computers. He connected me with people who gave me great advice about being a woman in this business. He gave me great references. Right out of college I got a job as a municipal reporter with the Journal Inquirer, in Manchester, Connecticut. I worked my way up to covering bigger and bigger towns. Newspaper is a tough industry with lots of sexual harassment, but it provided a good foundation for the rest of my career.

Q: With all of this, why did you choose to adopt as a single woman?

A: I don’t have an easy path to a reason. I knew I wanted a child someday. By my mid-20s, I was working at ABC News. People were having kids later. My colleagues were having babies in their late 30s and 40s. I didn’t think there was a big rush. Then I hit 30, and my biological clock was serious. I’d had a super-long relationship and a string of short-term relationships, and hated the whole thing. At around 31, I decided I wanted to be a mom and landed on adoption pretty quickly. I didn’t have a burning desire to be pregnant or give birth. I just wanted to be a mom.

I wasn’t young to be a mother—but young to adopt as a single woman. Adoption for many people and for any number of reasons is their last chance to be a mother. It was my first choice.

Q: What preadoptive resources did you use?

A: I was living in New York and found the now-defunct Ametz Adoption Program, run under the JCCA (Jewish Child Care Association). They held a massive conference every year. That’s where I got a ton of information. I found my attorney there, my social worker, a preadoption support group, and a postadoption support group. I met my adoption therapist—something every adoptive family and birth mother should have. All these people were helpful, and I hooked up with them pretty early.

There’s not a lot of honest information about what adoption is really like. I also didn’t have a lot of adoption in my family circle. I didn’t have a point of reference. I had to do a home study and was expecting an avalanche of paperwork. But it really wasn’t that bad. I got to meet a lot of people with real adoption experience, good and bad, and it was really helpful.

Q: How did you emotionally prepare yourself?

A: I was pretty secretive. I was nervous about how it would impact my career. There is a certain side-eye for midcareer women who choose to have a family, but especially for a single woman. I didn’t have a timetable, so I spent a year saying to myself, What if I had a child right now? How would a child fit into my life? How would I parent solo? Hurricane Sandy hit, and I had to work. What if I had a child right now?

But when I had my child, all the scenarios I imagined didn’t happen, and all the ones I didn’t imagine did.

Q: What was your adoption process?

A: I placed two rounds of advertisements in papers around the country with the help of an adoption consultant. It was during the time when Russia closed its border to adoptions, so there were more two-parent families looking to adopt in the United States. I expanded my range to different states (based on area, economic issues, and state laws). I sent out five or six “birth mother” books to women who wanted more information about me.

On the first week of the second round, I got a call on my “800” number. (I called it the “baby bat phone.”) It was a woman in Mississippi. I’d envisioned myself with a girl, but she said, “It’s a boy!” I flew to meet her when she was around 24 weeks. He was born a few weeks later.

Q: Did you feel solid about your situation with her?

A: I don’t think anyone ever feels solid, but she seemed solid about her decision.

Q: Your baby was premature. What was that like?

A: I still hadn’t told anyone at work. My mom and I were planning to go to Mississippi again for an ultrasound—but we never made it. The birth mother had preeclampsia. When she was 28 weeks, I got a call at 2:00 a.m. that she was in the hospital. I was working for World News with Diane Sawyer. I told my supervisors and executive producer, and they couldn’t have been nicer. When I told Diane, she threw her arms around me and gave me the biggest hug, “If you need anything, call me.”

Three days later, Mississippi called and said, “They’re taking him. You need to get on a plane.” My mom and I were packing when they called again, “Congratulations, Mommy. He’s here. And he’s beautiful.”

As I arrived at the airport, they sent me a picture. He was beautiful. He just looked like a really small baby. I got to the hospital and was scared to see him. How do you bond with a baby? I wanted more information. I asked them what he was going to look like.

The first few days were intense. He was so tiny that when they drew blood to test, they’d put the remaining [blood] back into his body. I was allowed to put one hand around his tush and another hand on his head. I could put my finger in his hand, and he would grasp, but his hand only went half way around my finger.

He was in the NICU [neonatal intensive care unit] for 73 days. I’m still in routine contact with his nurses. One of them is his godmother.

Q: What resources did you have when you brought him home?

A: I brought him back to the hotel with a heart apnea monitor. I was scared. Some of the nurses came over to help. I was down there for three months. Then I took him home to New York and stayed home with him for another two months.

My mom helped when she could, and a pediatrician, but really it was just us. I was in New York with a baby in the dead of winter. I never would have made it without my adoption therapist.

Q: How long did your adoption process take?

A: If he weren’t premature, it would have been a year.

Q: When did it sink in you were a Solo Mom?

Q: Did you feel a shift in your community?

A: Most of my community already had kids. There were little things about being a single mom [that made me feel] shafted. If you are a traditional family, with a mom and dad, you’re considered a family. I felt people viewed us as “me plus one.” I’m not included in the planning of events and vacations because it’s assumed it will work for me. It continues to this day.

Also, people always say, “I’ll be there when you need.” If I had all the help I was promised, I’d be in Tahiti. Every little, tiny last detail has to be figured out and executed by me.

Q: What is your favorite Solo Mom tip?

A: When I’m not directly interacting with him, I’m multitasking. If he’s eating breakfast, I’m loading the dishwasher. If he’s brushing his teeth, I’m doing his hair. If he’s going potty, I’m wiping down the bathroom counter.

I also involve him. If I’m scooping dog poop, he finds the poops.

Q: What keeps you from going crazy?

A: At one point, I had a crisis of confidence and felt like I was failing at everything. “I can’t do it all and do it well.” My aunt told me, “Don’t worry that you can’t do it because you are doing it.”

Q: As a Solo Mom, what about yourself makes you the most proud?

A: I think I’m a good mom. I look at him and see the good parts of me. He’s a good person, he’s funny, and I hear myself in him. There was never a fraction of a second that I wondered if I did the right thing. We had a rough beginning, but he’s the best thing I’ve done in my life.